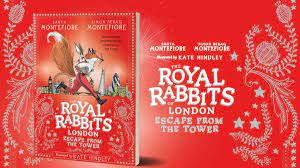 Little Shylo Tawny-Tail is proud to call himself one of the Royal Rabbits of London!

That’s a secret group of people who live under Buckingham Palace and protect the Royal Family.

But high up in London’s famous skyscraper, the Shard, a horrible group of people are plotting to cause chaos. They’re the Ratzis!

When the Grand Burrow is attacked and Shylo is kidnapped, it looks as though they might just manage to wreak havoc!

Can Shylo escape in time to save the day?

Escape from the Tower is the second book in the Royal Rabbits of London series.

The books have been likened to a cross between The Hobbit, Fantastic Mr Fox, and Watership Down, so you know it’s going to be great!

Dan had a chat with the writers, Santa Montefiore and Simon Sebag Montefiore, about their first book!

The Royal Rabbits of London: Escape From the Tower is out now!