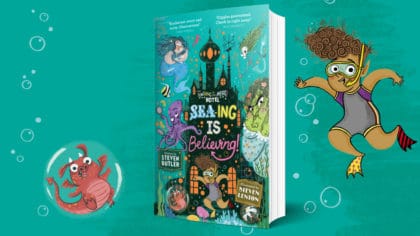 Welcome to The Nothing to See Here Hotel! A hotel for magical creatures run by Frankie Banister and his parents.

Sea-ing is Believing is the latest book in the Nothing To See Here Hotel series by Steven Butler and Steven Lenton.

In the story, Frankie Banister and his family are preparing to celebrate Grandad Abraham’s 175th birthday – an occasion that’s going to be even more HONKHUMPTIOUS now that Abe’s ghost has shown up!

When the unexpected spook reveals a secret UNDERWATER wing of the hotel that’s been hidden away for years, the Banister’s decide there’s only one thing for it… a whopping welcome home bash in the spectacular BRINY BALLROOM.

Secrets and sea monsters are lurking in the shadows, and is everything as it seems with Grandad Abraham’s ghost? Or is there something fishy going on?

The story is written by Steven Butler who grew up in but now lives in London.

He’s written loads of really great books including The Diary Of Dennis the Menace and The Wrong Pong fiction series!

Steven Lenton, who illustrated the book, comes from Cheshire and now works from his studio in Soho in London.

Best known for illustrating the bestselling Shifty McGifty series, Steven has illustrated many lovely books as well as writing and illustrating his own stories!