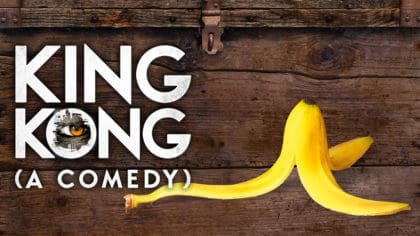 King Kong is all about a group of adventurers who sail to Skull Island in search of a big, scary monster called Kong.

When the adventurers arrive, a group of people who live on Skull Island kidnap a girl called Ann. The adventurers fight back, rescue Ann and flee the island, but they also take Kong with them!

Chained and shackled, the monster taken to New York City and shown to audiences who laugh and scream at him. Until he breaks free…

A funny version of the story is showing at The Vaults Theatre in London. It’s called King Kong (a comedy) and is showing until the end of August.

The show is written by Daniel Clarkson and directed by Owen Lewis. Between them, they have three nominations for really special theatre awards!

Hidden in an intergalactic wonderland there’s a Christmas space tale waiting to be told. Join Santa and...

It was the BAFTA & Young People Awards this weekend! Take a look at the winners below: The Snail...

Join Tad and his gang on their latest exhilarating adventure in Tad The Lost Explorer and The Curse Of The...