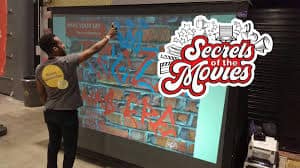 If you’ve ever wanted to get behind the screen and work out what exactly happens on a film set, now’s your chance!

Secrets of the Movies is back for a spooky Halloween spectacular, this time at The Gallery, 15 Bateman Street, Soho!

There’s a cool VR funhouse, a digital graffiti wall, as well as loads of creative activity tables! The gallery itself is dressed as a spooky haunted house and even features some Scooby Doo themed stuff!

There’s also a new exhibition of film posters and on-set photographs as well as a Halloween film quiz, with other games available in a soft play area.

You can even follow a trail of panels indicating who does what on a film set, demystifying job titles such as ‘gaffer’, ‘best boy’ and ‘VFX technician’!

Plus, a massive model cinema, custom-built from 25,000 LEGO bricks, will also be on display! It’s of a cinema foyer and auditorium and took over 150 hours to build!

Playing: nothing on us by mackenzie ziegler

When the Flatbottoms rushed to the hospital on the night of their baby’s birth, they...