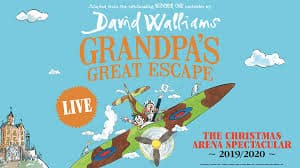 Grandpa’s Great Escape is a book by the famous author David Walliams.

It’s all about a boy called Jack and his Grandpa who’s been sent to an old folks home – Twilight Towers.

But Jack’s Grandpa was a World War II flying ace and won’t go down without a fight! Jack and his Grandpa plot a daring escape but little do they know, the wicked matron is on to them…

The book is being adapted into a stage show for the very first time and will be touring around UK arenas this Christmas!

The show will be massive with the sets recreating London with landmarks such as the River Thames and Buckingham Palace being in each show. It even has a life sized Spitfire that soars through the air!

The show will be touring around the UK and going to loads of places: