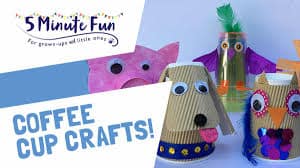 We’re sharing a load of fun, five minute activities to get you and your little one moving during Fun Kids Junior!

They’re from the guys at Five Minute Fun, who believe it’s possible to keep your little one entertained without tiring yourself out or spending lots of money!

One way you can stay entertained is by making fun things from coffee cups!

You’ll need: two cups, googly eyes, red paper, scissors, plus a black pom pom (or use a circle of black card instead), plus paper and sequins to make a collar

First, help your child mark 4 points an equal distance around the rim of a cup. Now they snip the cup from the rim to the base at the 4 points. They should have four flaps.

Then they round off one flap to make the dog’s face. The ones to either side are the ears.

Now they stick on googly eyes, the dog’s nose and snip and stick a tongue.

Next, they flip the second cup and add a strip of paper to the bottom to make the collar. They can decorate it with sequins.

Finally, they pop the head on the second cup. That’s it!

This little piggy: a paper cup becomes a snazzy snout

First, you’ll need to help your child trim the cup to about half its size.

Now, they paint the cup and paper plate pink (or use pink card).

Next, they pop the cup on the plate (or card) and draw the outline of a pig’s head that works with the size of it. If using a plate, the inner rim is a useful guide for drawing and cutting out a round head shape.

Now they assemble their pig by gluing on the snout and googly eyes and drawing on nostrils.

The mane guy: transform cups into a really lovely lion

First they make the head and mane by cutting from the rim of a cup to the middle. Repeat lots of times all the way around the cup. Then they’ll need to give the mane a bit of a trim as it’ll be too long.

Now they paint the whole head and mane orange.

While that dries, they cut a tail from orange card.

Then they take the second cup and give the lion front paws by snipping from the base to the rim again.

Finally, they draw a face on the head and tape it to the cup. Then tape on the tail.

Hello Mr Owl: a wise way to reuse a cup

Give your child the giant googly eyes and some coloured card. They stick the eyes to the card and then draw bigger circles around them and snip them out. They cut out a beak, too.

Turn the cup upside down and get them to glue on the eyes and beak. Then give them sequins so they can give the owl shimmery feathers on its tummy.

Finally, they can stick a feather at each side to make wings.

Brilliant bird: an easy way to make a feathery friend

Flip the cup and give it to your child so they can stick on googly eyes.

Now they snip and stick a beak and feet.

Finally they add feathers for the wings and a funky tail feather.

If you liked this, there are loads more activities on the Five Minute Fun website!