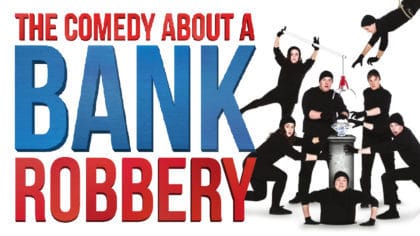 At on Tuesday, 5th February 2019, we heard from Chris Leask and Jenna Augen, two stars of ‘A Comedy About a Bank Robbery!’

That’s a show that’s currently in London. It’s been described as ‘the funniest play’!

In the show, Minneapolis City Bank has been entrusted with a priceless diamond.

An escaped prisoner is set on pocketing the gem with the help of his sidekick, trickster girlfriend and the maintenance man!

In a town where everyone’s a crook, who will end up bagging the jewel?