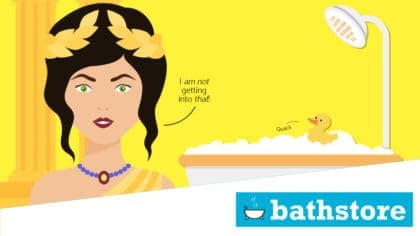 There’s a room in your home where big things happen. A room where tubs become ships and bubbles become beards…

If you love a soak in a bubble bath or can’t wake up without a morning shower, you might wonder how we would ever manage without our bathrooms.

Bathing has certainly changed over the years.

Let’s take a dip into history!

Bathrooms have been around for many, many years. The Ancient Greeks had washrooms – and even running water and to carry away the waste.

And if you were in India 2,000 years ago, you might have come across a bath – well, if you were very wealthy!

Otherwise, you and everyone else would have to make do with the rivers – which often served as the toilet too. Poo bath anyone?

A little later the Romans became the experts on baths and many survive to this day – you can visit the Roman Spa in the appropriately named Bath!

The Romans had in their villas and townhouses, and these weren’t just any old tubs – they had warm baths, cold baths, heated floors and walls.

For the less wealthy there were public baths, or thermae, which were so popular that enormous amounts of water had to be collected and brought to the cities in aqueducts.

After the fall of the Roman Empire, bathing went out of fashion.  In fact many people thought it was a sin to be too clean!

A few centuries later and bathing became popular again.  People in the Middle Ages enjoyed a dip in the tub so much they had built communal public baths for men and women.

But as the population grew, it was harder to get enough clean water for public bathing and people started to fear that they would catch diseases from others.

Once again, bathing was out!

Instead of bathing, Tudors would wear linen underclothes – which meant a lot of work for Tudor servants.

But however clean the clothing was, Tudors couldn’t hide the fact that most people were just, well, smelly!  It was common for people to carry pomades to sniff, made from citrus fruits, spices and vinegar to mask the pong.

By the Georgian Era, being clean and not smelly was on the rise again, and rich people would have a washbasin, set on elaborately designed and expensive stands, in the corner of their bedrooms.

If you were poor, you’d have a bathtub in your kitchen, filled slowly with hot water from the stove and shared by everyone in the family.  The most important person of the household (father) would bathe first, then mother and finally the children.

The expression “don’t throw the baby out with the bath water” probably came from this period of time when babies were bathing in the (most likely murky) bath water.

And you’d have to share an outside toilet and laundry facilities with your neighbour!

Having a separate room in your home for a bathroom wasn’t commonplace until the 20th century, and house being built up to the 1960s with outside facilities!

Today we see more and more technology entering the bathroom. Does your bathroom have sensors for automatically turning on lights?

THE LOWDOWN ON LOOS

The humble toilet is something many of us take for granted. However, the next time you flush, just pause a minute to marvel at what is a truly incredible feat of human engineering.

For many centuries people, especially the poor, would go to the loo pretty much anywhere – and the earliest “privvies” were nothing much more than a hole over a pit or a seat with a container underneath for the poo and wee.

Even in the Victorian Era, roads and gutters in poorer parts of cities would be full of human waste.  And most families would share a privvie with their neighbours.

In Tudor times, if you were rich you could use one of the “Great Houses of Easement” – these were communal loos which were basically a hole situated over a river.

Other people would use a chamber pot – a china bowl with a handle which could be kept under a bed.

You’d do your business and then empty the pot out of the window, either into your garden or – watch out below – the street below!

If you weren’t observant, you might get a nasty surprise when walking down a Tudor road!

In 1596 Sir John Harrington invented Britain’s first flushing toilet.  Even though he was a cousin of Queen Elizabeth, she refused to use it because she wanted the toilet to come to her and to not have to go into a different room.

A big breakthrough happened in the 18th and 19th Centuries when sewers were built in many cities, helping to carry the poo and wee safely away. Although this made a massive improvement to people’s health, they weren’t without risks.

Toxic gases could escape back into the privvies – sometimes causing an explosion (you wouldn’t want to be sitting on one when that happened).

In 1775 Alexander Cummings, a invented the S-trap. This was a breakthrough for the humble loo as it meant water would be trapped in the toilet, making a barrier to stop the yucky whiff and the dangerous gases from the sewer escaping into homes.

And in 17891 a Thomas Crapper invented the flushing loo as we know today, which helped make loos a lot less smelly.

Today, you can choose a loo in pretty much any colour you like these days, to match your bath or your wallpaper – even your pet!

More From Fun Kids Learn
Back to top