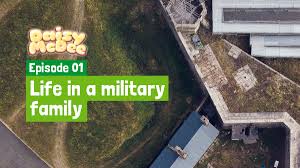 That means he helps to build and fix things for the army.

Having a soldier for a dad’s cool, but sometimes it can make life different!

Maisy is Daisy’s imaginary friend. She turned up when Daisy was little and has been around ever since!

Being a military kid, sometimes Daisy’s dad has to go away for several months at a time, and that’s when seeing other kids with their dads can make her feel lots of tricky emotions.

Of course, being in the army doesn’t always mean just fighting wars!  Most of the time, army members help people when there’s an emergency – like floods, earthquakes, famines.

Usually being an army kid means you live on army bases.

That might also mean you move around a lot, going to where the people in charge say you need to be.

That can sometimes be difficult too and might mean leaving friends behind – maybe even moving schools.

Either way, military kids do the same as you, just a few things are different.

Playing: half as good as you by tom odell feat. alice merton