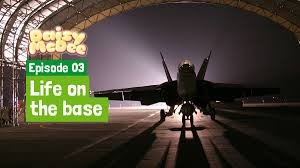 Daisy’s showing her new friend, Cara, around the base and talks about what its like to live there and some of the other places she’s lived.

Daisy has been showing her new friend around the base where I live along with other military families.

In bases, there are lots of places to live.

There are blocks of flats, rows of houses and married quarters – for families. The bigger houses are usually ones for the officers!

There’s also a mess. The mess is the name for a place where soldiers can hang out and eat – a bit like your canteen at school!

The army pays for a lot of things on base and that means there’s more money for other stuff if soldiers live there.

Soldiers live on bases because if a job means they have to work in a different part of the country, they can up-and-move without too much trouble.

There are over a 100 military bases in the UK and many are home to families as well as the military personnel.

One of the oldest is Alanbrooke Barracks in North Yorkshire, which is home to the 4th Regiment Royal Artillery. It was built in 1724.

Hyde Park is one of the famous barracks. It’s home to the Household Cavalry Mounted Regiment. These are the soldiers on horseback who you see at Buckingham Palace, in state and ceremonial occasions. 120 families live in the barracks, which sadly aren’t in Buckingham Palace itself, but nearby in more modern buildings.

Do you know if there’s a military base near you?