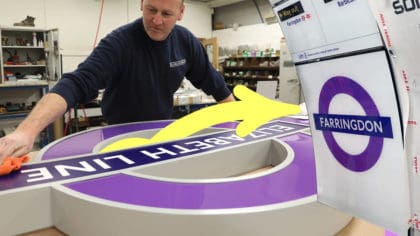 The first wave of Elizabeth line roundels are now in place with only months to go until the opening of the new railway!

The Elizabeth line will stretch more than 60 miles from Reading and Heathrow in the west, through London via special tunnels, and out across to Shenfield and Abbey Wood in the east.

10 brand new stations have been built and over 30 have been upgraded to make room for the Elizabeth line.

Those really iconic London Underground signs you see are called ’roundels’ and the first wave of Elizabeth line roundels have been going up around London.

The roundel has existed since 1908, when it first used to help the station name stand-out from adverts and posters.

The roundel is at the heart of our heritage, guiding Londoners and visitors to our city for over 100 years.

Now it’s being used as part of the Crossrail project and the Elizabeth Line will even feature on the London Underground map one day!

In 2019, customers from Reading and Heathrow will be able to travel all the way through central London to the West End and the City and beyond without needing to change trains!

Britain’s Digital Railways, in association with the Royal Academy of Engineering

Tudors In The City