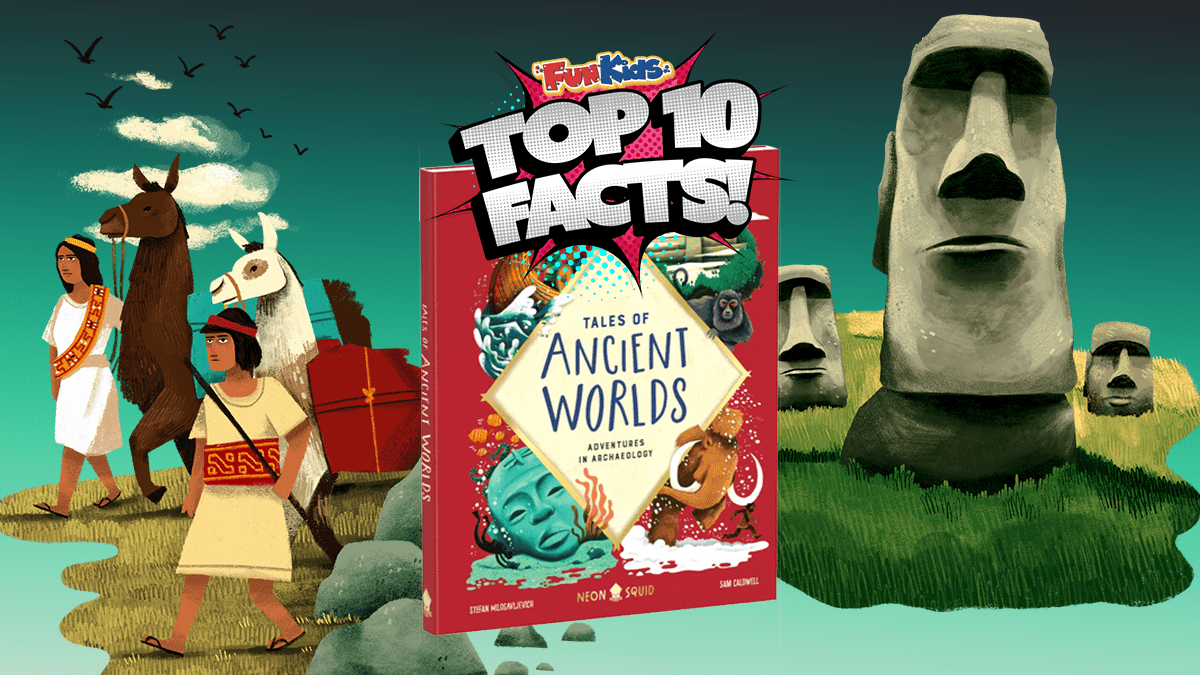 1. There is an early human fossil called ‘Lucy’.

The famous early human fossil ‘Lucy’ was named after the song Lucy in the Sky with Diamonds by the Beatles.

It was playing in the car when archaeologists found the fossil!

Neanderthals were very much like us but there were a few differences.

They had slightly different skulls from us.

Their bodies were a bit shorter and wider!

3. Archaeologists have found Ice Age flutes made from bird bones.

They used to play music.

We know this because archaeologists found ancient flutes.

They were made from bird bones!

4. The oldest complaint ever found is almost 4,000 years old.

The oldest complaint letter ever found is almost 4,000 years old!

It was written by a Mesopotamian man called Nanni.

He was unhappy with some copper he had been sold.

Read the letter in the brand new book Tales of Ancient Worlds.

They had 20 seats in a row and no walls between them.

People would even share the same brush to wipe their bums!

6. New Nazca Lines have been found in the Peruvian desert.

Around 2,000 years ago there were people called the Nazca.

They lived in the desert in Southern Peru.

The Nazca scratched huge images of wild animals into the desert rocks which can still be seen today.

New Nazca Lines have been found in the Peruvian desert using drones and artificial intelligence!

Get your hands on Tales of Ancient Worlds here!

7. The Stonehenge stones almost weigh the same as a blue whale!

Have you ever visited Stonehenge? Maybe you’ve driven past it!

The stones have always been a bit of a mystery. How did they get there?

They are very heavy. In fact, each one weighs around the same as a blue whale.

They mainly had a human body with an animal head!

Some of the most well-known ones are:

9. A preserved poo is called a coprolite.

Imagine if your poo was discovered in thousands of years time! How embarrassing…

It would be called a coprolite.

Well, that’s exactly what happened to a Viking.

A new bank was being built in York in 1972. Archaeologists went digging to see what they could find before the building could begin.

One of their most exciting finds was a poo!

It sounds a bit disappointing but it tells us a lot about how the Vikings lived including their diet and if they had any health problems.

Want to find out more about preserved poo? Click here!

10. The Mayans had a writing system.

The Mayans had a writing system where they used hieroglyphics.

Hieroglyphics are signs that make up sounds and words.

There were up to 800 glyphs in their writing system.

If you want to learn more Ancient World facts, make sure to get a copy of Tales of Ancient Worlds where you’ll find incredible tales of history.