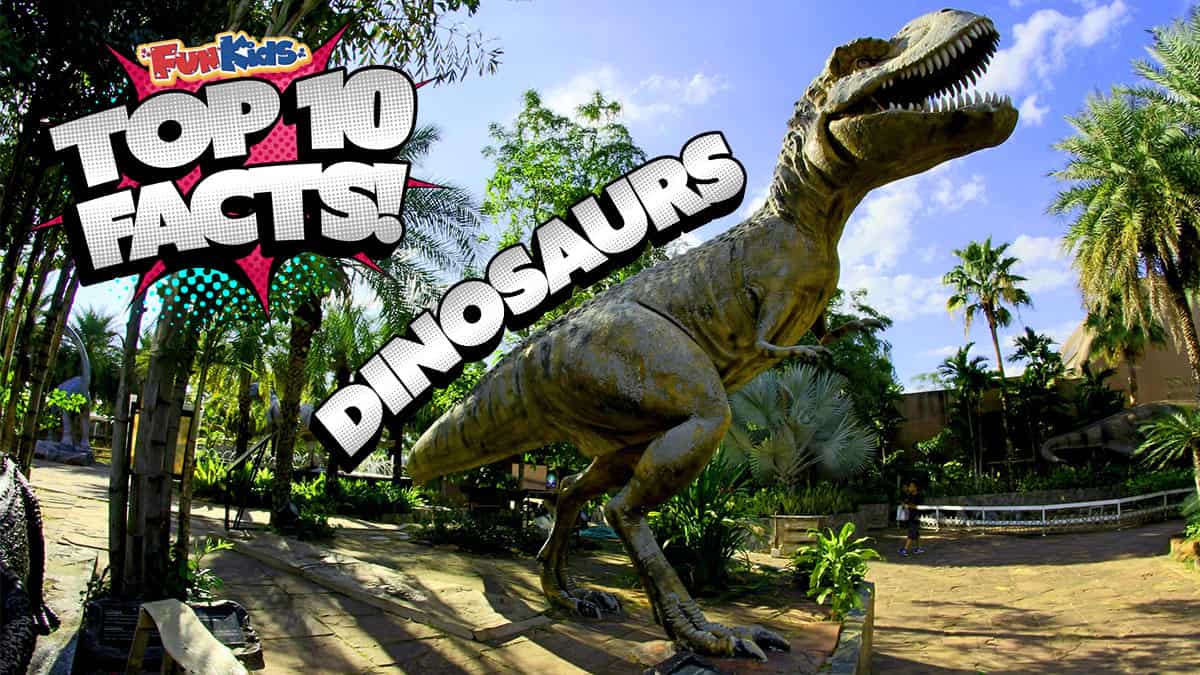 1. Dinosaurs were around millions of years ago!

Dinosaurs were around millions of years ago.

It is believed that they were on Earth for a whole 165 million years.

They became extinct around 66 million years ago.

2. Dinosaurs were around in the Mesozoic Era or “The Age of Dinosaurs”.

Dinosaurs lived in the Mesozoic Era, however it is often known as “The Age of Dinosaurs”.

During this era, there were 3 different periods.

They were called the triassic, jurassic and creaceous periods.

In these periods, different dinosaurs existed.

Did you know that the Stegosaurus was already extinct by the time the Tyrannosaurus existed?

In fact, it was extinct around 80 million years before!

There were lots of different species of dinosaurs.

In fact, there were more than 700 different ones.

Some were big, some were small..

They roamed the land and flew in the skies.

Some were carnivores and others were herbivores!

4. Dinosaurs lived on all continents.

Dinosaur fossils have been found on all continents on Earth, including Antarctica!

We know that dinosaurs lived on all continents because of this.

The people who look for dinosaur fossils are called palaeontologists.

5. The word dinosaur came from an English palaeontologist.

‘Dino’ comes from the Greek word ‘deinos’ which means terrible.

‘Saurus’ comes from the Greek word ‘sauros’ which means lizard.

Richard Owen came up with this name in 1842 after he had seen lots of dinosaur fossils being uncovered.

He realised that they all linked in some way and came up with the name dinosaur.

6. One of the biggest dinosaurs was the Argentinosaurus.

Dinosaurs were huge and all ranged in different sizes.

There were very tall ones, very small ones and very heavy ones!

It is believed that the Argentinosaurus weighed up to 100 tonnes which is the same as around 15 elephants!

The Argentinosaurus’ poo was the equivalent of 26 pints. Yuck!

It was also around 8 metres tall and 37 metres long.

7. Tyrannosaurus Rex was the most ferocious dinosaur.

It is believed that the Tyrannosaurus Rex was one of the most ferocious dinosaurs there was.

The Tyrannosaurus Rex had the strongest bite of any animal on Earth, ever!

The dinosaur was given the name “king of the tyrant lizards” and was about the size of a school bus.

8. The longest dinosaur name is Micropachycephalosaurus.

That is definitely a mouthful!

The Micropachycephalosaurus was found in China and is the longest dinosaur name there is.

It’s probably the hardest one to say as well!

It was a herbivore which means it was a vegetarian.

This dinosaur would have lived around 84 – 71 million years ago.

9. Lizards, turtles, snakes and crocodiles all descend from dinosaurs.

Although dinosaurs are extinct, there are still animals around today which come from the dinosaur family.

These are lizards, turtles, snakes and crocodiles.

10. An astroid hit and they became extinct.

An astroid hit Earth which made lots of dust and dirt rise into the air.

This blocked the sun and made Earth very cold.

One of the main theories is that because the climate changed, the dinosaurs could not survive and became extinct.

Find out more about Dinosaurs