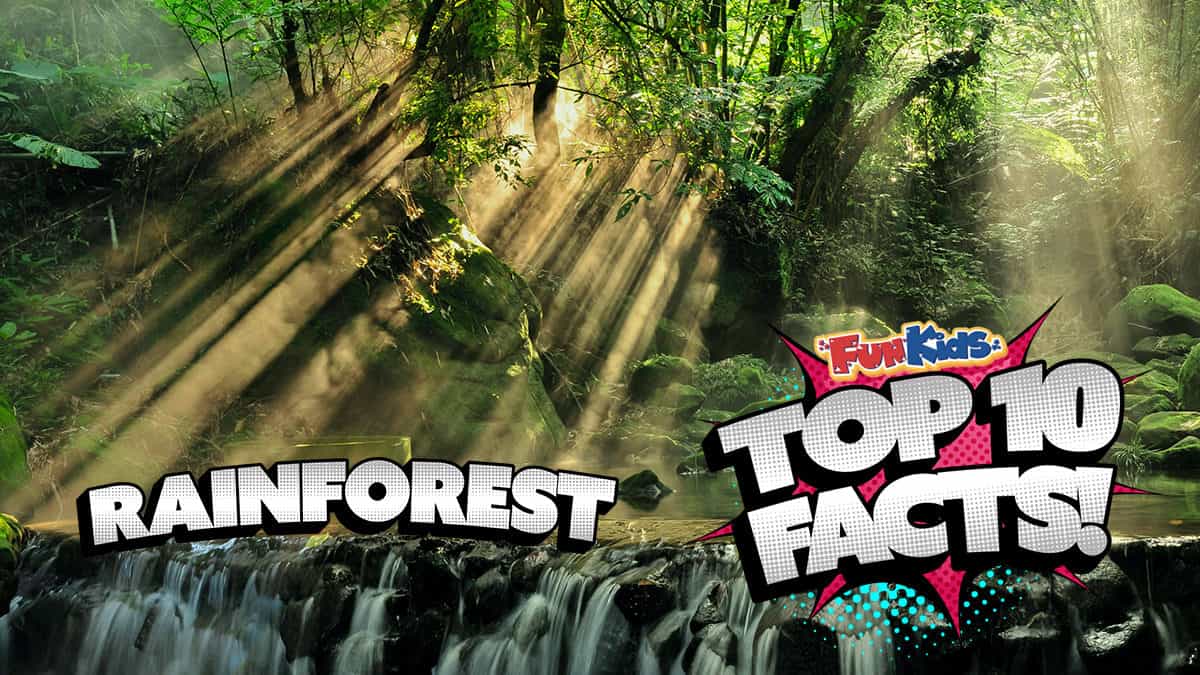 1. 6% of the Earth is covered by the rainforest.

Rainforests only cover around 6% of the Earth’s surface.

There isn’t much left which is why we now need to look after it more than ever.

Unfortunately because of the demand of wood and land, we now only have less than half of what we used to have.

2. It can take 10 minutes for a raindrop to fall to the ground.

Rainforests are packed with trees.

It creates a canopy high in the sky which acts like an umbrella.

This means it can often take 10 minutes for a raindrop to hit the floor from the canopy!

3. Rainforests are full of rain!

Well, it’s because they have a lot of rain.

It is always very warm and very wet.

On average there is between 80 and 430 inches of rain each year!

4. Around 2% of sunlight reaches the ground.

The rainforest ground is a very dark place.

The canopy above blocks out most of the sunlight from hitting the floor and so because of this there are a lot of dead plants and leaves.

Around 2% of sunlight actually reaches the ground.

5. The rainforest helps with making medicines.

There are lots of things found in the rainforest which are used for medicines.

25% of medicines actually come from the rainforest.

For example, there is a medicine called Quinine which helps to cure malaria.

This is found in the bark of the cinchona tree.

6. There is a lake in the Caribbean island of Dominica which is 88°C.

On the Caribbean island of Dominica, there is a rainforest.

In this rainforest there is a lake which can be as hot as 88°C.

It is known as The Boiling Lake.

7. Chocolate, pineapple and cinnamon all come from rainforests!

We get lots of things from the rainforest including materials, food and medicines.

Some of the foods that come from the rainforests are chocolate (from the cocoa bean), sugar, pineapples, cinnamon, vanilla and more!

Without the rainforest we also wouldn’t have things like rubber and bamboo!

8. The Amazon rainforest has 2 and a half million different insects!

The Amazon is full of wildlife.

9. The Amazon rainforest in South America is the largest tropical rainforest.

The Amazon rainforest in the largest there is.

However, the Amazon mainly covers Brazil.

10. The two types of rainforest are temperate and tropical.

You would be able to find temperate rainforests in places such as New Zealand, Western North America and South-eastern Australia.

They are usually near cooler coastal areas.

Tropical rainforests are very hot and are found near the equator.

You can find tropical rainforests in Australia, Central and South America, Southeast Asia, Western and Central Africa, Western India and the island of New Guinea.

Find out more about forests and climate change here!