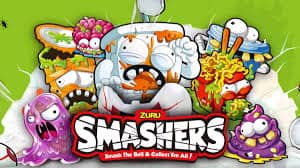 There’s a disgusting surprise in every SMASH, so get ready to unbox a collection of revolting critters!

The second series of SMASHERS brings an all-new EYEBALL SMASHBALL to house a crew of freakishly GROSS SMASHERS characters!

Each character lives inside a SMASHBALL which can only be discovered once smashed open.

There are over 100 characters to collect and some Smashball Eyeballs come with creepy mini-beasts covered in slime!

The SMASHERS Series 2 collection is available in one, three, and eight packs – all full of horrifically foul surprises!

Once you’ve got your gruesome gang, you’ll need somewhere to store them…

Keep your fave SMASHERS characters in the disgustingly gross Puke Pizza collectors tin which holds 50 and comes with a grungy Limited Edition Smasher inside!

And for on-the-go fun, take your SMASHERS on the road with the Sludge Bus!

Unveil two exclusive characters and unfold the playset to uncover the rank restroom where you can shoot your SMASHERS into the toilet! Yuck!

Playing: a little love by celeste