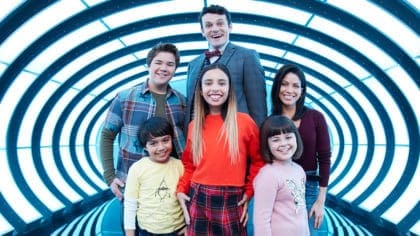 In Gabby Duran & The Unsittables, Gabby lands an out-of-this-world job in her new town: babysitting a group of alien kids! We catch up with actress Kylie Cantrall – who plays Gabby in the show – to find out more…

How would you describe your new Disney Channel show?

Gabby Duran & The Unsittables is an awesome sci-fi comedy. In the show, Gabby moves to a new town and she doesn’t fit in, because she’s different to everyone else. She’s a fish-out-of-water. She finds that the kids in this new town do things a different way, so she has to find her purpose in the town. She has to find her way.

What does she do?

She rebels a little. She covers her school principal’s car with tape and she starts to pull lots of shenanigans at school. She thinks that if she causes a little chaos, her mum will move the family back to where they lived before.

No! While she’s doing these shenanigans, her school principal starts to admire the fact that she’s courageous, adventurous and out of the box. That’s when he decides to hire Gabby to babysit his alien nephew. The principal reveals that there are tons of aliens hiding out in this town and they’re all in need of a good babysitter. That’s when Gabby Duran becomes the best babysitter in the galaxy!

How naughty are the aliens in the show?

Oh, they can be pretty naughty. The main alien that I babysit is a kid called Jeremy and he likes to do his own thing a lot of the time. The others aren’t so easy. There’s an alien warrior that I babysit who is very fierce!

How similar are you to Gabby Duran?

We have quite a few similarities. I’d describe Gabby as a fashion-forward lovable girl, and I like to think I’m the same. We both stick up for what we believe in and we’re both very adventurous, too.

What’s your favourite episode of the show?

That’s such a hard question to answer! Literally every episode is cool, but I guess episode three is one of my favourites. It’s called Crybaby Duran and it’s really funny. Episode six – Crushin’ It – is really fun, too. And the finale is amazing.

Why should people tune into Gabby Duran & The Unsittables?

Take us on set, Kylie… How long do you spend in hair and make-up every morning?

Hair and make-up is super quick for me. My make-up is pretty easy and very natural. It’s very minimal and my hair is straight every day, so I probably spend about 15 minutes in there in total. I’m easy!

What pranks are pulled behind the scenes?

To be honest, we’re all really nice to each other. We’re too nice for pranks – but we’re always laughing on the set. Everyone gets along really well, so there’s a really great atmosphere at work.

Will we see any animals in the show?

There have been a few animals in the show, but there are a lot more aliens than animals. The aliens look incredible! What animals have we had on set? There’s a dog in episode three. Oh, and there’s a bear in another episode.

It’s a robot bear! It’s definitely not a real, roaring bear. It’s hard to explain, so you’ll just have to watch the show and figure it out.

Kylie Cantrall has the best advice when it comes to babysitting…

TIP ONE: BE WISE!

Kylie says: “If you want to be the best babysitter in the galaxy, it’s a good idea to have some rules in place. Be wise about it. Make sure the kid isn’t playing around with the oven or anything dangerous. If there are aliens around, don’t let an Invisalizard out of his cage and don’t take a telepath to school!”

Kylie says: “I think babysitters have a huge influence on kids. A lot of people I know are like, ‘The babysitter I grew up with gave me so much good advice. She was like a mum to me.’ For that reason, I think it’s a good idea to think about how you can make a big impact when you’re babysitting.”

Kylie says: “Make sure you’re able to give the child good advice that they can hold on to forever. Make sure you’re there for the kid and support the kid. And if it’s an alien shapeshifter kid, don’t give them soda pop!”

TIP FOUR: MAKE SURE YOUR PHONE IS CHARGED!

Kylie says: “It’s a good idea to make sure you’ve got all the important phone numbers in your phone. And make sure your phone is charged! Always have your phone nearby in case anything happens where you need to contact someone quickly.”

TIP FIVE: HAVE FUN, BUT BE RESPONSIBLE!

Kylie says: “My top babysitting tip is simple. It’s your job to look after the kid, so make sure you do that. Have fun, but never ever forget your responsibilities.”