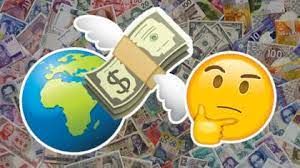 Specifically, how much money is there in the whole wide world?!

Well, according to one big bank in England, the average house has £14.15 just laying around.

In America, the average household has about $100 laying about which means if every household in America pooled their cash together, they would have $15 billion! That’s $15,000,000,000 in just change…

If we were to collect all of the coins and banknotes in the world, it comes to about £3.79 trillion! But that’s only 10% of the money in the world.

Most people have bank accounts that let them store and access money quickly and easily. If we add that to all the coins and notes, it suddenly becomes £18.93 trillion…

That still isn’t all of it though!

In the American economy, the bank in charge doesn’t even report this figure anymore, but as a measure of money that could be spent, it’s real.