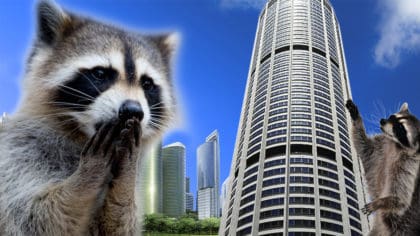 We all know Spider-man loves climbing buildings, but he might have bumped into something rather strange if he tried climbing this one in America…

That’s because a raccoon has been spotted climbing a huge skyscraper in Minnesota.

It was originally spotted on the roof of a nearby building and was taken down by the people that work there. But rather than scurry off into the distance, the racoon decided to climb one of the largest skyscrapers in the city – moving up, down and sometimes sideways…

Luckily, the animal has made it to the top of the building unharmed but it took almost twenty hours for the small creature to climb the 32 floors.

Here are some some updates But he is napping now pic.twitter.com/quxMjJWoyS

Loads of people gathered at the windows to take pictures and cheer the little guy on in the hopes that the racoon would make it to the top safely!

There came a point where the racoon, which some people are calling the MPR Racoon, after the name of the local radio station that first told everyone about it, passed the last vent on the building.

That meant it basically had to climb the whole thing because the racoon probably couldn’t turn around.

Video of the #mprraccoon making it all the way up to the roof of the UBS building where there is potentially live traps with food. The raccoon has gone 2 days without food or water!! pic.twitter.com/v7rU2OkCTH

Luckily the little guy made it to the top of the building.

The animal has now been caught and is expected to be taken back down to ground level and released, hopefully far away from other buildings!