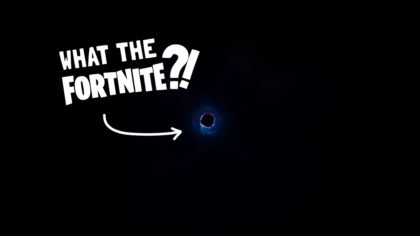 Loads of players have been greeted with an image of a blackhole.

It gently pulses, makes cool sounds and occasionally a number or two spews out from the top.

Nobody aside from the team who make Fortnite, Epic Games, really knows what’s going on but that doesn’t mean people aren’t trying to guess!

The Black Hole first occurred on Sunday night, around 10pm in the UK.

If you were playing, the moment the blackhole appeared looked something like this –

There was epic music and as players were then sent into the air.

Suddenly, a meteor reappeared, smashing into the island as it did at the end of season 4, but with much more of an impact.

That’s when the blackhole appeared. The game has been offline ever since.

The key theory is that this is a stunt to mark Fortnite Chapter 2. Some people think that when the servers come back online, you’ll be able to play that.

Some others think that the makers of the game have just decided to shut it down.

This happened with a popular game a few years ago called Flappy Bird.

The person who made the game said he didn’t like how many people had become addicted to it and so removed it from the Apple App Store.