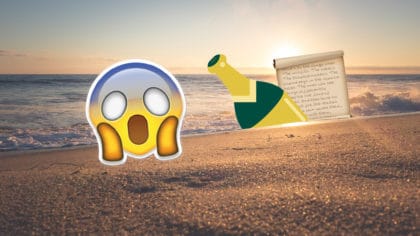 Have you ever been to the seaside and made a message-in-a-bottle?

That’s where you write something down on paper, seal it up, and send it out to sea.

The ocean currents carry it around until it ends up on a beach somewhere far away!

Well, one woman in Australia has just found the world’s oldest message in a bottle yet – at 132 years old!

Australian photographers Kym and Tonya Illman found it lying on a beach and thought it looked really cool.

Luckily, the message was marked with the ship’s coordinates, the date, and the name of the ship.

The message in a bottle seems to have been thrown overboard from a German ship in June 1886 as it crossed the Indian Ocean.

The Western Australian Museum has authenticated the note, meaning they reckon it’s real.

The curators at the Museum even checked the journal of the captain of the ship.

Incredibly, there was an entry recording a drift bottle having been thrown overboard!

It turns out it was all part of a German experiment to track sea currents. Thousands of bottles over 69 years are thought to have been thrown overboard.

662 other messages from the same German experiment have been found, the last of which was in 1934.

The previous record for oldest message in a bottle was 108 years.

The bottle and message will be on display at the Western Australian Maritime Museum for the next two years.