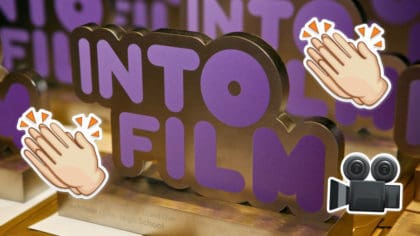 If you’ve ever dreamed of being a filmmaker, listen up! Yesterday, winners of Into Film‘s fourth annual Awards were announced.

Awards across 11 categories were given to a range of youngsters aged 9 to 19 a really special red-carpet event.

Basically, the Into Awards is kind of like the Oscars of young filmmaking. They’re dedicated to people like you who make and review movies.

Loads of people submitted short films and movie reviews to be considered in the Awards, and the nominations explored a huge range of themes including bullying, history, and immigration.

Click here to find out more about Into Film!

The short films were created and produced by individual people or as part of a team, in schools, colleges or youth groups.

The movies were judged by proper film people, like directors and writers and movie stars.

Here are some of our fave winners!

Best Live Action by 12s and Under went to Swyn by Dyffryn Nantlle Film Club in Gwynedd, Wales.

This live action, all in Welsh, was created, produced, written by and starred an all-girl group of young filmmakers aged from 8 – 10.

Best Animation by 12s and Under went to The Great Escape by Willowmann Producations / Braunston Primary School.

Playing: you're welcome (from "moana") by dwayne johnson