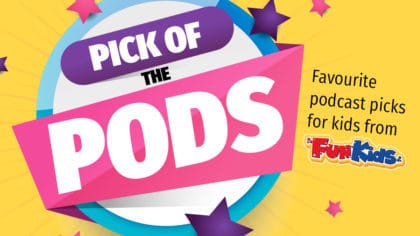 Every week we’re picking some great podcast episodes for you to listen to when you’re out and about. Some are from us here at Fun Kids and others are from all around the world!

In this episode, Ketch bags an invite to the premiere of Manchester City’s brand new documentary and gets to chat to Man City stars John Stones and Fernandinho! Paz and Ketch also run down the highs and lows from an exciting week of Premier League action and predict what’s going to happen on the weekend!

This week Brains On, from the US is talking sounds, smells, and tastes that some people might find repulsive. They’re also asking why? Which is always a good question! They find out what the reason is that we find some things disgusting! Plus they also answer a listener’s question – “Why do worms come out when it rains?

Fun Kids Science Weekly: Lots of sciencey fun to have at home and an Egyptian recipe!

Here in the UK, on our Science Weekly, Frankie catches up with Michelle Dickinson who’s got a new book – The Kitchen Science Cookbook. Each recipe is a science experiment that you can do at home, using simple ingredients you probably have in your cupboard. We also find out the answers to loads of science questions including “Who is it that makes all the machines and robots in our house?” and “Who’s in charge of the radio waves?”

Story Quest: Embassy of The Dead by Will Mabbitt

Story Quest is our podcast which has loads of brilliant free stories and audiobooks each week. We’re in the middle of hearing Will Mabbitt’s Embassy of the Dead. In it, Jake opens a strange box containing a severed finger (ugggh!) and then he accidentally summons a grim reaper to drag him to the Eternal Void (yep, it’s as fatal as it sounds) and now he’s running for his life! But luckily Jake isn’t alone – he can see and speak to ghosts.

Circle Round: Sadko And The Sea

If you love stories, then you’ll like Circle Round. It’s a podcast with folk stories from all around the world. In this week’s story, we meet a harp player whose music was so inspiring that it shook the oceans. In Russia, they’ve been sharing versions of this folktale for centuries.

Playing: it's on by meaghan martin & demi lovato & cast of camp rock 2