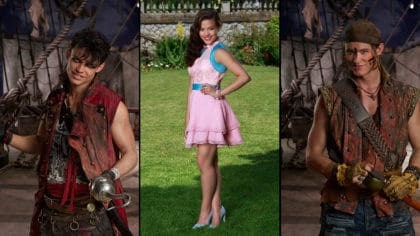 Descendants is coming back!

All of your favourites will be returning including Dove Cameron, Cameron Boyce, Sofia Carson and, Booboo Stewart.

If you’ve never seen it, the series follows the kids of someone of Disney’s most scary villains. The embark on crazy adventures and get up to loads of mischief.

In a teaser video posted to the Descendants YouTube channel on Friday night, Mal also seems to reveal a new villain character.

It’s only thirty-seconds long but seems to have loads of fans really excited.

The video has over 1.4 million views, and just says “You didn’t think this was the end of the story, did you?” in the description.

The cast will be filming in Vancouver, Canada this coming summer with the movie expecting to debut on Disney Channel in 2019.

We’re not too sure what will happen in the third instalment, but we’ll keep you updated!

If you can’t wait for Descendants 3 to come out, we’ve got loads of Descendants-themed stuff on the Fun Kids website!

There’s Descendants Desk Tidies, a folder to make, and we’ve even got exclusive interviews with some of the cast!

Check out the time Thomas Doherty (who plays Harry Hook) and Booboo Stewart (who plays Jay) chatted to Dan about Descendants 2!