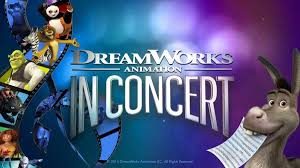 Basically, they’re projected in HD onto a big screen as music is played live by a symphony orchestra!

Fresh from a tour of the US, the show has had really good reviews, even selling out the Hollywood Bowl.

The show celebrates more than 20 years of music with scores by Hans Zimmer and many others.

When the Flatbottoms rushed to the hospital on the night of their baby’s birth, they...