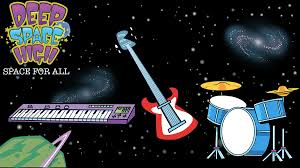 Music and space have always had a special relationship

Classical composers through the ages, from Haydn and Holst, to Gorecki and Glass, have looked to the Sun, Moon, planets and stars to feed their creativity and fire our imaginations.

It’s more then just classical composer that have been inspired by space though! Spaceflight has been the subject of countless popular songs. It has provided a massive source of inspiration in the important area of popular entertainment, reflected by space themes being heard increasingly in pop music.

Music even accompanied the crews of the first missions into space. The first Moonlanding crew of Apollo 11 famously carried Dvorak’s New World Symphony with them, and the Apollo 15 crew took songs by The Beatles with them.

Today, astronauts take music into space digitally, on their laptops or MP3 players (some even play instruments!). The European Space Agency (ESA) astronauts have shared their playlists with the public, on ESA’s Spotify music channel and other streaming services. Astronauts say it’s one of the most personal things that you’re able to take up with you in orbit.

Is there any music that comes from space?

It might not be music but space is teeming with noises!

From the brooding, slightly ambient rumblings of Saturn and its rings to the more romantic Neptune, which sounds like sitting on a back porch in Tennesse in mid-July, our solar system’s soundtrack is as emotionally-nuanced as it is almost cinematic. Just wait till you hear what Uranus sounds like, though!

Some spacecrafts have instruments capable of capturing radio emissions that they find in space too. When scientists convert these to sound waves, the results are quite eerie to hear.