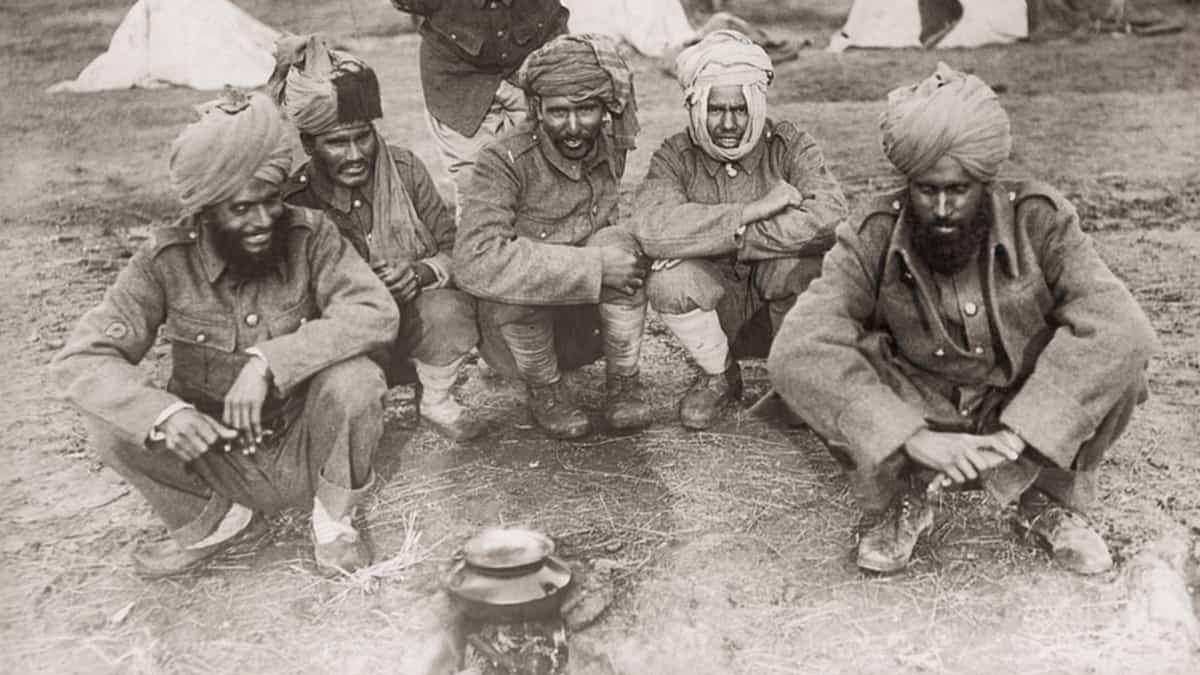 Poppy and Joe find out about the Empire’s contribution to the British Armed Forces, whose dead are buried in CWGC cemeteries.

The photograph shows Indian soldiers fighting with the British for their King – King George V.

At the time of the Great War, Britain had an Empire. Australia, Canada, India were all part of the Empire.  So when Britian went to war, soldiers from across the Empire came along to fight with Britain.

The British Empire sent over two and a half million men to fight during the First World War.

Bikes were sometimes used to get to the battlefields or to carry important messages. They weren’t actually used during the fighting. Soldiers could also carry equipment and supplies on their bikes.

India played a crucial role in both world wars, sending over 1.5 million soldiers.

The Neuve Chapelle Memorial in France remembers 4,700 Indian soldiers and labourers that died on the Western Front and have no known graves.  The memorial is in the style of early Indian shrines – a sanctuary enclosed within a circular wall. There’s a 15 foot high column, with carved tigers on either side to guard the temple.

There’s also a memorial in India. It’s called the Delhi Memorial – or India Gate – and commemorates all Indian soldiers who died in the First World War.

The Commission also has burial sites for those from other countries who didn’t fight but who contributed to the war in other very important ways.

As well as soldiers fighting on the front line, others from the Empire helped keep them stocked up with supplies – you know food, clean clothes, ammunition – you name it! But as more and more soldiers were killed, soldiers who worked on the supply lines were sent to the front line.

So to make sure that supplies kept coming, the Britain Government recruited a labour force from other countries to help out.

The Chinese sent over 140,000 labourers to help in France and Belgium. They were known as the Chinese Labour Corps and were attached to the British Army.

They built camps, salvaged weapons and munitions from the battlefields, and carried out important repairs to roads, railways and airfields. Now whilst they weren’t here to fight, over 2,000 still died during the war.

Members of the Chinese Labour Corps are commemorated at the Noyelles-sur-Mer Chinese Cemetery at the estuary of the Somme, as well as in Plymouth, Liverpool and near Folkestone in Kent.

The Commonwealth War Graves Commission’s memorials and cemeteries remember all the servicemen and women from all the Commonwealth countries that fought with Britain.