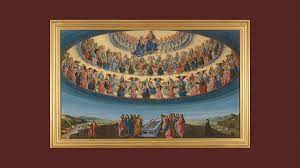 This is a painting called The Assumption of the Virgin that was painted in 1475 by Francesco Botticini. It was on the wall in a burial chapel in S. Pier Maggiore, Florence, Italy. The man kneeling down on the left is Matteo Palmieri, who’s a civil servant. You can see his widow, Niccolosa, opposite him. But you’ll notice she looks a nun! This is to make her look very religious and gives us a hint that she’ll never marry again. Behind Matteo, you can see Florence and Fiesole and his farm. Behind Niccolosa, you can see there are farms in the Val d’Elsa hills which all belonged to her family.

Now have a look at the angels above. There are lots of them! They’re all looking at the tomb of the Virgin Mary, filled with white lilies above christ, who receives her into the highest circles of heaven. There are three levels of angels you can see here, the highest are the Councillors (Seraphim, Cherubin and Thrones), in the middle are the Governors (Dominions, Virtues and Powers), then the ministers (Principalities, Archangels and Angels).

Let’s hear from one of the angels at the back:

Dominions, Virtues, Powers next
And one of them I ain’t
They way they act so snooty
Try the patience of a saint

Can you paint light?

There are loads of different types of light, but can you paint the sunlight like in this painting?

Have a think about how you can tell the sun is hitting clouds in the sky. Does it turn the clouds a different colour? Does it show up the different textures? See if you can paint the sun bursting through the clouds!

Have a go at painting a landcape too!

Once you’ve created your sky, can you paint the sunlight hitting some hills and trees?

Draw a different type of light!

Can you draw a vase in candlelight? How is it different? Try painting on a black background and picking out the light!