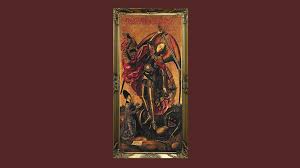 This is called Saint Michael Triumphant over the Devil. It was painted by one Bartolomé Bermejo in 1468. If you look really closely, you’ll see a really scary devil character at the bottom with a big grinning smile. It was probably the central panel of an altarpiece which was in the church of San Miguel (Saint Michael) in Tous, near Valencia.

The kneeling donor is Antonio Juan, Lord of Tous. He holds a psalter (a book containing the book of psalms from the bible) open at two penitential Psalms (Psalms 51 and 130 – penitent means “seeking forgiveness”). That heavy chain and sword show that he is a knight.

Bermejo’s has used the Netherlandish technique of painting in oil, and you can see it in the modelling of the donor’s head, in Saint Michael‘s crystal shield and in the reflections of the Heavenly City on his breastplate, which you can just see if you look close enough.

Let’s take a closer look at the devil. He’s flat on the ground like a snake, and if you look at his body, something isn’t right! He has a snake’s tail, wings of a bat, arms like bird’s legs, he’s got a second mouth coming out of his stomach and two sets of red eyes. His arms have scales with metal armour, and he has toothed mouths for elbows, and it looks like he’s eating his own body! Yuck!

Let’s see what happened in the battle!

Yo Devil! St Michael’s in the house
I’m gonna take you down, you big girl’s blouse
Cos I’m fine. My armour is gold
Got a mighty sword, I’m brave and bold
And you’re nothing, you’re a scaly beast
Gonna chop off the head I like the least
Cos you’re ugly with a crocodile tail
In a beauty contest EPIC FAIL
I’m a saint and I got style
When people see you they run a mile
I’m so cool and you’re just a joke
Look at me in my lovely cloak
I got wings – yeah I can fly
Yo Devil! Time to say bye bye

Devil: I’m the devil, you’re a stupid saint
So think you’re all that, but you ain’t
I’m Beelzebub, you don’t scare me
Could have you for breakfast and for tea
Cos I’m hungry, I want something to eat
Look at my teeth, I’m gonna bite off your feet
And my claws, gonna rip you to shreds
Think you’re drop dead gorgeous – nah! You’re just dead
You got no style and that’s for certain
Your cloak looks like your granny’s curtains
Your fancy armour covered in pearls
Who did your hair? It looks like a girls’
You got a shiny shield, cos you’re so vain
Only need it to check your reflection again
You’re pants – I think that’s fair
You’re the patron saint of underwear

Donor: Don’t mind me, I’m in the background
That sword looks sharp, don’t swish it around
I’m Antonio but my mates call me Tone
I’m praying that Devil will leave me alone
Cos I paid for all this and it didn’t come cheap
To prove I got faith (I’m a bit of a creep)
And for status, to show off my wealth
Now I want to go home before I wet myself

Saint Michael: Prepare to die, don’t go crying to mummy
You got lizards for arms and eyes in your tummy
I’ve jewels on my shoes, what d’ya think about that?
Cos I’m wiping them clean on you like a doormat

Devil: Yo Mike! You’re having a laugh
Cos I got you trapped with my tail ’round your calf
You may look pretty, that’s all very well
I’m not your doormat, I’m the Ruler of Hell

Can you see if you can create a hidden reflection in your painting?

In the painting, you can just about see a holy city in the breastplate of Saint Michaels’ armour. See if you can paint a reflection in something you’re drawing – perhaps there’s a reflection of a garden in your vase?

Create your own monster!

Draw something really scary! In the painting, the devils’ body looks very strange with all of its’ mouths and scales. Can you draw something even scarier?

Can you draw a knight in shining armour?

What shapes can you see? And how do you draw reflections? See if you can draw a knight battling your monster and see who wins!