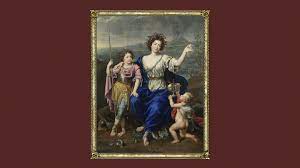 This painting is super colourful! And it’s of a very posh lady – the Marquise de Seignelay. It’s by a French artist called Pierre Mignard. The Marquise was a real noblewoman who lived over 400 years ago, which was when this painting was made. It’s a riot of rich costume and colour and has quite a story behind it too.

In the picture, the Marquise and her sons are all dressed up – it’s not how they were normally dressed. She’s dressed as a Greek Goddess called Thetis, her eldest son is Achilles and even the toddler gets a Greek makeover too – he’s Cupid. The robes they are wearing are brightly coloured in reds and blues. And there’s golden armour and jewellery everywhere. Even today the colours pop out at you!

The Marquise was married to a powerful nobleman who died quite young, so she was left alone with her children. Women didn’t have the same rights as they did then, and in those days, the only option she’d have was to find another nobleman to marry! So she used what money she had left to show how beautiful and rich she was by dressing as these God-like characters in this colourful painting.

Colours are really important to show how wealthy she was! Today pencils, pens and paints come in all the colours of the rainbow, but it wasn’t always that way. Without knowing lots about chemistry, early painters had to create colours from materials from around them. That could be rocks, plants or even animals! Then they had to find ways to make the colour blendable. And then really importantly, make sure that the paint lasted and didn’t oxidise and fade.

It was easy to make earthy colours – browns, blacks and whites from mud, ashes and chalky rocks were pretty easy to find and keep their colour. They’ve been used in paints since Stone Age times. But other colours would have been much harder to make!

Green can be particularly tricky. Now, whilst there are lots of green things in nature, of course, it was hard for chemists and painters to capture the colour in paint in large amounts until the 1800s. Funnily enough, lots of paintings from then started to feature rolling hills and countryside – something that had previously been almost impossible to paint realistically! The most successful greens were made from a very precious and expensive stone called Malachite. So only very rich patrons, like the Marquise, or artists could afford to create paintings using such vibrant greens.

Yellow and orange colours came from ground-up minerals such as lead, orpiment or realgar, whilst a very bright red called Cochineal was made from squashed beetles. Yuck!

Blue is everywhere – not least in the sea and sky. But blue was always a very difficult colour to make because it doesn’t appear in things which can be made into paint. For a long time, the only way to get a good deep blue was to grind up a rock called Lapis Lazuli – and that was very expensive to get hold of because it had to come all the way from Afghanistan and had to travel a long way across land and sea.

This is one of the reasons why the Marquise in the picture is draped in lush blue fabric because to use that much colour was a sign that the painting had cost a lot of money. It’s a massive show of her wealth and the way she’s dressed shows she thinks she’d be a pretty good catch for a nobleman.  After all, who wouldn’t want to marry a goddess?

Try making your own colours for a painting without using paints!

Can you imagine how you would create all these different colours without using modern-day paints?

There are loads of different things you can use in your kitchen that can be used to stain things. You could use beetroot to get purple, blueberries to get blue, turmeric to get yellow, and strawberries to get red.

How would you start?

Experiment with them before you create a painting! Make a blob of each of your colours on a piece of paper and wait for them to dry. Did they change colour? Or did they stay the same? Is the colour rich enough? Wear some old clothes though!

What would you choose to paint with your colours?

Maybe you could paint a fruit bowl using your colours! Paint your strawberries using real strawberries, a banana using turmeric paint, and beetroot for some juicy grapes.

How would you get the colours to last?

In Medieval times, they used water and egg to make the pigment stick to the paper without running off. The only thing with egg and water is that it tended to crack and come away from the paper unless it was painted in lots of very thin layers. Later on during the renaissance period, linseed and walnut oil started being used instead to make the paint last a bit longer and make it easier to paint with. Then, honey was used to stop the paint cracking in storage. During the industrial age in the 1800’s, painters bought paints in tubes, so they didn’t need to make their own anymore.

What would you use to keep your paints looking bright and colourful?