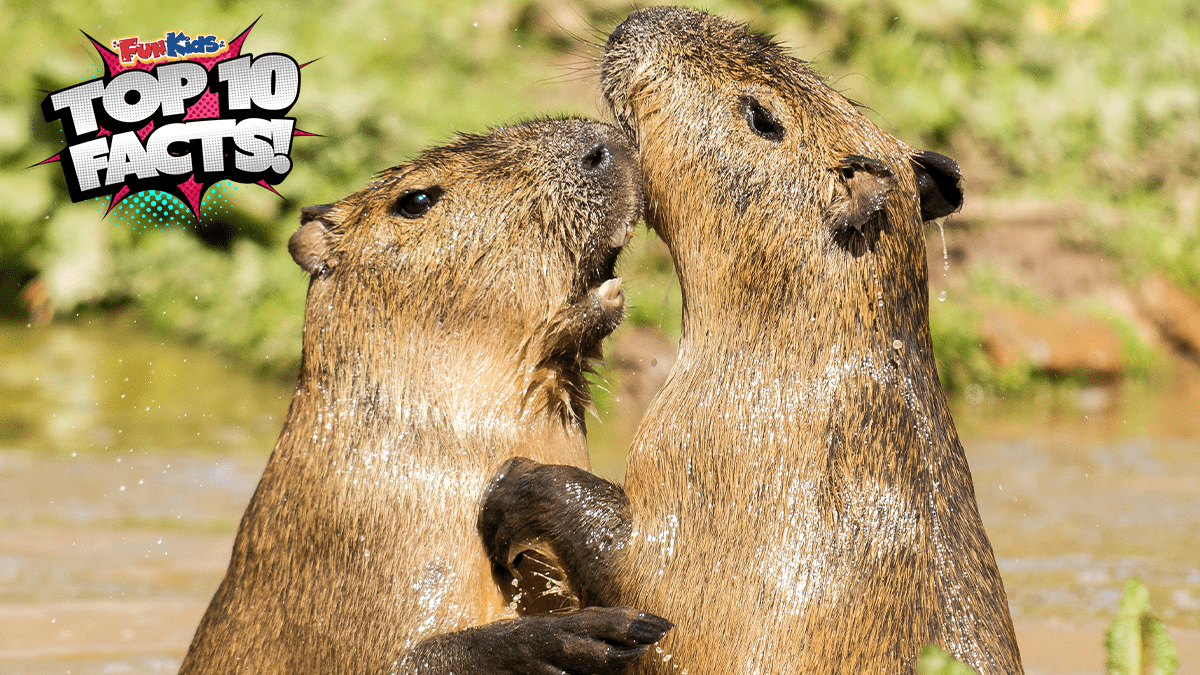 Beavers spend a lot of their time building dams with branches and small tree trunks.

Dams slow down the flow of the water in a river. It helps to create a pond that is deep, quiet and away from predators.

Once they have made the dam, they live in the quiet water behind it.

Dams come in all different sizes but the biggest dam is more than 850 metres long and is located in Canada.

Beavers are rodents, a bit like mice and rats.

All rodents have teeth that grow continuously throughout their life.

They need to grind them down to keep them short.

Beavers grind their teeth on wood such as tree bark!

If you look closely, their teeth are orange!

This is because their enamel has iron in it which makes their teeth really strong.

Learn how to keep your teeth healthy in the video below!

You wouldn’t imagine a bottom to smell of vanilla!

Beavers have things called castor sacs which is where their castoreum is stored.

4. Beavers can hold their breath underwater for 15 minutes!

Wow! Imagine being able to hold your breath underwater for 15 minutes.

Beavers can, which is quite lucky as they spend most of their time in the water.

Most humans can only hold their breath for 30 seconds, so that’s pretty impressive!

Beavers are massive compared to their rodent family!

They are much bigger than a rat…

…but what if we told you that they used to be MUCH bigger than they are now?

Beavers existed in the Ice Age but they were giant!

6. They slap their tails on the water to warn family members of danger.

They use them for lots of different things like helping them swim, to balance upright and also to store fat for the winter.

Their tails are also very important for when they are in danger.

Beavers will slap their tails on the water to warn their family!

Baby beavers have their own name.

They are called kits.

Beavers usually have one to four kits at a time.

8. Beavers have their very own goggles!

Beavers don’t have one or two pairs of eyelids.

Their third pair of eyelids are transparent, which means they can see through them.

This means that when they are swimming underwater, they can look through their third transparent eyelids and still be able to see little bit.

This means they don’t eat meat.

Their main diet is plants, grass, bark, twigs and leaves!

Learn all about herbivore dinosaurs here!

10. Beavers have travelled by parachute!

Well, the ones in Idaho, USA do.

In 1948, the Idaho beavers were annoying the locals and relocating them was proving difficult.

It was decided that they would go to a protected area so they could be safe and live a happy life.

However, it was so hard to get them there… it was decided that they would parachute down in a wooden box.

There were 76 parachuting beavers.