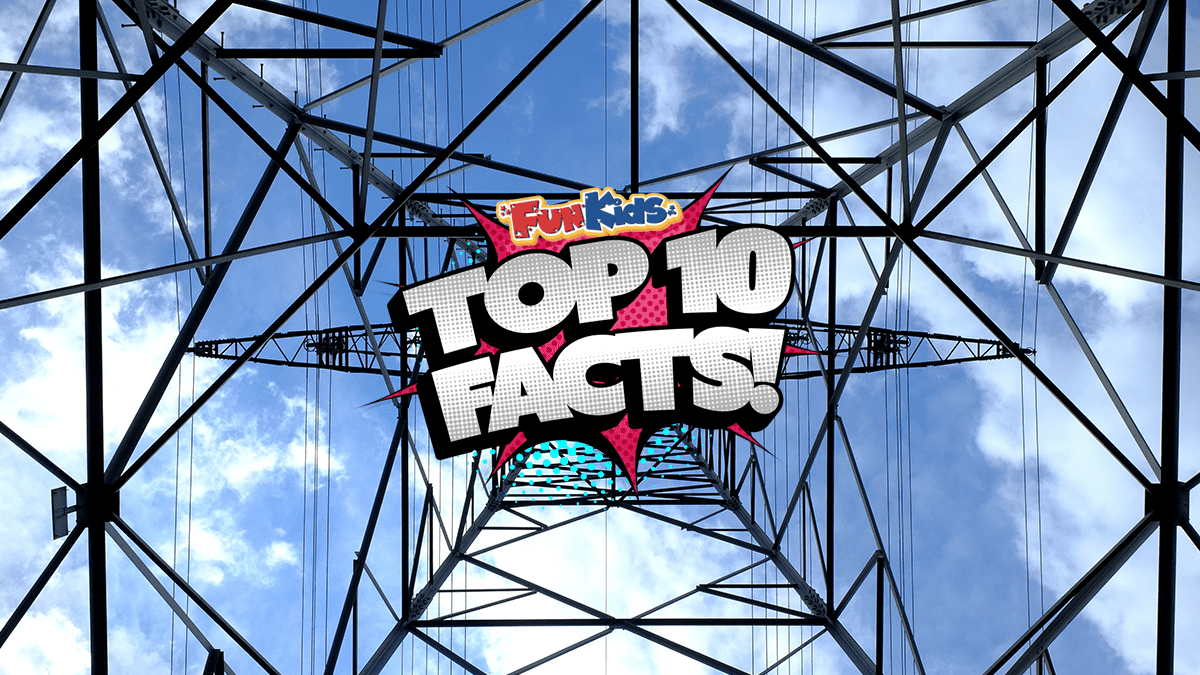 1. The word pylon comes from the Greek word pyle!

The word pylon comes from the Greek word, pyle!

Back in the 20s, when pylons were invented, ancient Egypt was very popular as Tutankhamun’s temple had been discovered.

There were pylons outside Egyptian temples, which were gateways.

As the new pylons were the gateway for electricity, it was decided that they would be called pylons.

2. The first electricity pylon in the UK was built in Scotland.

Did you know that the first ever pylon in the UK was built in Scotland?

It was built in a place called Bonnyfield.

Pylons are used to support the electric cables.

These cables transmit high-voltage electricity from where it is generated.

This might be from a power station or a wind farm!

The cables are how electricity travels to your home.

How does electricity get into our homes?

4. The design of pylons was decided through a competition!

However, the design of them was decided in a competition in 1927.

The competition was run by the Central Electricity Board. The winner was the Milliken Brothers which was an engineering company based in America.

The design was chosen by Blomfield who was the designer of London’s Lambeth Bridge.

Pylons haven’t changed in over 100 years.

However, you are going to start seeing new ones soon!

T-pylons are a new design for the UK and are under construction now.

The design was submitted by a Danish company into a competition. It won out of 250 entries!

Read how you can work in the energy industry!

Next time you’re in a car or on a train, see how many pylons you can see out of the window!

These pylons hold over 4,300 miles of high-voltage cables in England and Wales.

The tallest pylon in the world is 380 metres!

That’s four times the height of Big Ben in London.

It’s located in China between a place called Jintang and Cezi islands!

8. Birds don’t get electrocuted if they sit on a power line.

Have you ever wondered why birds can perch on power lines and be absolutely fine?

It’s because electricity doesn’t move through their body.

As the bird isn’t touching the ground, or anything that is in contact with the ground, they are absolutely fine!

The electricity stays in the power line. Phew!

Learn how to stay safe around electricity here.

9. The tallest pylons in the UK are on each side of the River Thames!

The tallest pylons in the UK were built in 1965.

They are on each side of the River Thames.

The two towers are 190 metres tall.

One is in Botany Marshes in Swanscombe, Kent. The other one is in West Thurrock in Essex!

They are taller than the BT Tower.

10. Some pylons are due to disappear!

Lots of pylons are due to disappear!

There are thousands of pylons which are in the country’s most beautiful places.

You might have seen them on fields and they don’t look very nice.

National Grid is working to make underground electricity tunnels, so the landscape will look much nicer.

The work has already started in Dorset!