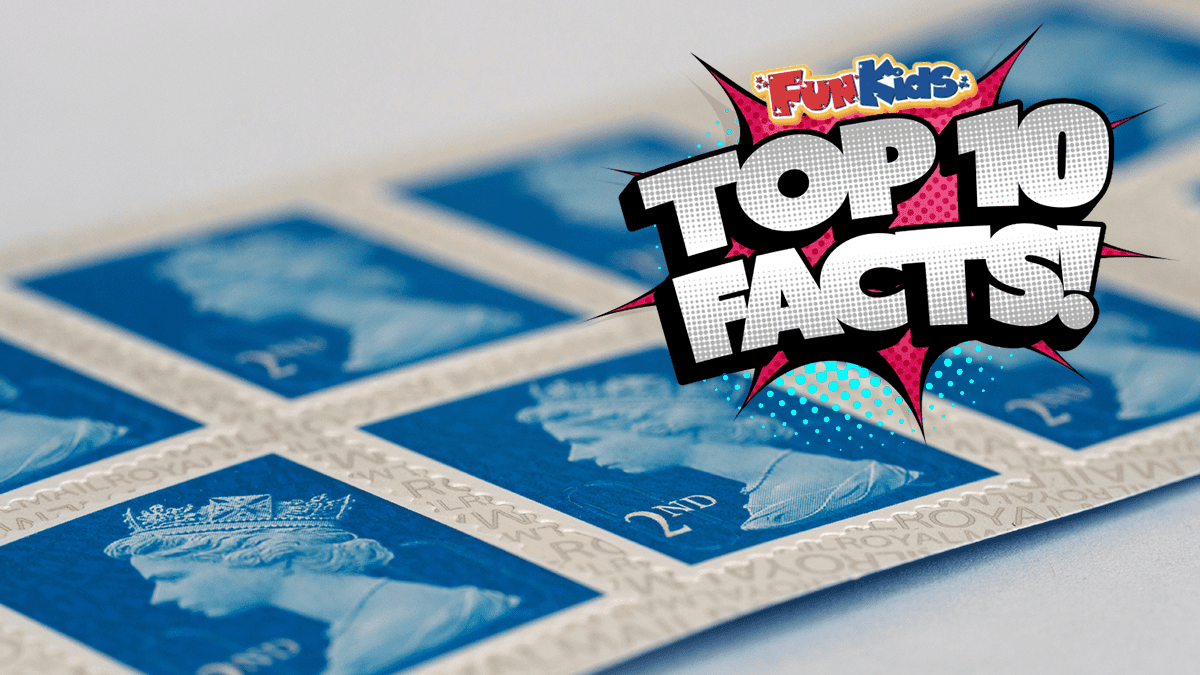 The world’s first adhesive postage stamp was made right here, in the UK!

It was brought out on 6th May, 1840. Stamps have been around for quite a while now.

Find out all about it in the fact below…

2. The first ever stamp was called the Penny Black.

The first ever stamp was called the Penny Black.

It changed the postal system forever, as people could pre-pay before they sent something.

As you have probably guessed from the name… the stamp was black.

Did you know that the person who invented the first adhesive stamp was Sir Rowland Hill?

He did such a good job that he was knighted!

This was because the black stamp didn’t show up any marks made on it – so they thought red would be better!

The Penny Red stamp was used for years to come and around 21 billion were produced.

They stopped making them in October, 1879.

5. Postage used to be paid by the recipient rather than the sender.

Before we had stamps, postage was always paid by the person receiving the letter!

Now we can buy stamps, the sender has to pay for the postage.

However… in the case that the sender does not pay enough postage, Royal Mail can request a fee from the receiver.

Check out our top 10 facts about Royal Mail!

6. The first non-royal on a stamp was William Shakespeare.

Did you know that the first ever non-royal to appear on a UK stamp was William Shakespeare?

Before this it was only Royals!

William Shakespeare first appeared on a stamp in 1964.

7. First class and second class post was introduced in 1968.

If you want to send something quickly then you should buy a first class stamp.

The postage will be a little more expensive than second class but will get there quicker!

The first and second class system came in in 1968.

There are lots of exciting stamps that are released now!

They are used to celebrate lots of special occasions.

You can see the stamps that are coming out this year on the Royal Mail website here.

There are lots of stamp collectors. In fact, if you look on the Guinness Book of World Records website, you can see all of the different collections!

Within these collections there are the most stamps with birds, amphibians, paintings, ships and even pandas!

George Vavvas from Greece has the largest collection of first day cover stamps.

This means they are from the first day the stamps were authorised for use in their specific country.

10. The most expensive stamp in the world is the British Guiana 1c magenta.

According to Guinness World Records, the most expensive stamp in the world is the British Guiana 1c magenta.

The final selling price is nearly one billion times the original face value of the stamp.

Playing: lost in the woods (from frozen 2) by jonathan groff (kristoff)