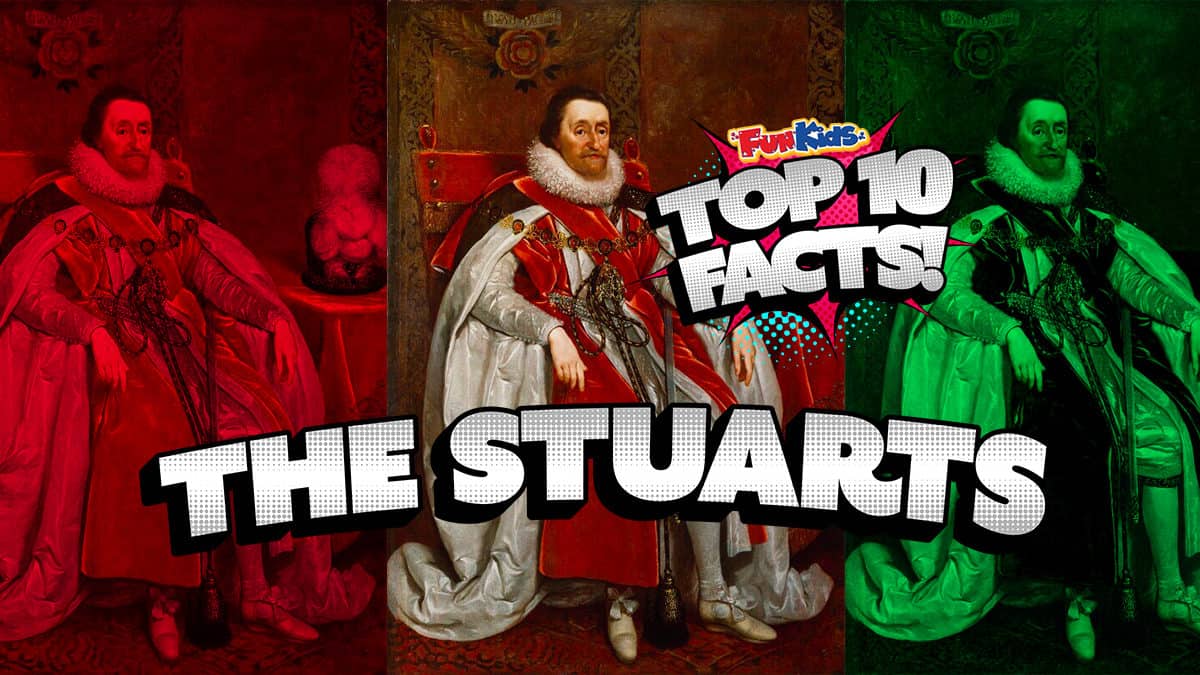 It was just after the Tudor Period.

Lots of historic events happened during this time.

2. In total there were 7 Monarchs in the Stuart Period.

The Stuarts were the first Kings of the United Kingdom.

James VI of Scotland was also known as King James I of England. This is the first time that England and Scotland had the same King!

3. The Gunpowder Plot happened in the Stuart Times.

It was a plot to blow up the Houses of Parliament and kill King James I.

This was because the Catholics were unhappy with the way they were being treated.

The plotters rented a cellar that went under the Houses of Parliament.

However, the plan failed when someone anonymous warned Lord Monteagle about what was going to happen.

Guy Fawkes was then found in the cellar as he was preparing the gunpowder.

This is where fireworks night comes from.

Learn more about Guy Fawkes and The Gunpowder Plot here!

4. The Plague happened during the Stuart period.

It was known as ‘The Great Plague’ and the ‘bubonic plague’.

The most common symptoms were headaches, fever, swellings and coughing up blood.

Over 100,000 people sadly lost their lives from it in London.

Doctors would wear these masks to protect themselves.

5. The Great Fire of London happened during this time.

The Great Fire of London happened in 1666.

It started in Pudding Lane and went on for four whole days.

Lots of houses were burnt down and people lost their homes.

Learn more about The Great Fire of London here!

6. Cities were very crowded which lead to bad hygiene.

During the Stuart period, cities were very over-crowded.

They were also very dirty which didn’t help when it came to illnesses.

The River Thames was a breeding ground for germs.

People put their rubbish in there and also emptied their toilets into the river.

The horrible thing is… they used to wash up and bathe in that very same river.

7. Shakespeare was alive in the Stuart period!

William Shakespeare was around in the Stuart period.

He was a poet, playwriter and actor.

Shakespeare was born in 1564 in Stratford-Upon-Avon.

8. The Royal Family were abolished in 1649 after Charles I was beheaded.

King Charles I ruled without the parliament for over a decade.

This was because he believed that all the power should be in his hands.

Charles was beheaded in 1649 and after this the monarchy was abolished.

Parliament then ruled until 1660, when the monarchy was restored.

9. In 1707 Scotland joined England and they became one.

In 1603 James VI of Scotland also became King James I of England, however Scotland and England were still separate.

However in 1707, during the reign of Queen Anne, both countries joined together to make Great Britain.

10. There were Frost Fairs on the River Thames.

During these times it used to get very cold. The nights would be below freezing.

The Thames used to freeze, sometimes for up to two months.

It was known as ‘The Little Ice Age’.

People would have something called a Frost Fair.

They would go onto the river and ice skate, eat food and listen to music.

CC: King James I of England and VI of Scotland by Daniel Mytens (NPG 109)