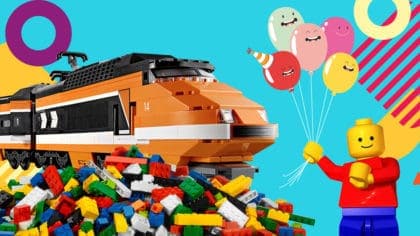 Since being created in a small town in Denmark in the 1950’s, LEGO has become one of the world’s most popular toys!

Well, this week LEGO is celebrating its 60th birthday. That’s nearly as old as your grandad!

In fact, the special moment falls at exactly 1:58 p.m. this Sunday!

To mark the special occasion, the company that makes LEGO is releasing a load of cool birthday stuff!

Of course, there’s something for all LEGO fans, from DUPLO-playing little-ones to Falcon-constructing adults!

One of the amazing things about LEGO is that all of the bricks ever made work with each other.

That means that an original 60-year-old brick is compatible with a brick made yesterday!

It’s all thanks to a special system called ‘in Play’, which basically a huge grid that all pieces are made to fit.

Did you know there are an estimated 102 bricks for every person in the world? That means in total there’s 714 billion bricks out there!

And since six 2×4 bricks can be combined a massive 915 million ways, all of those bricks make up 108,000 trillion combinations!