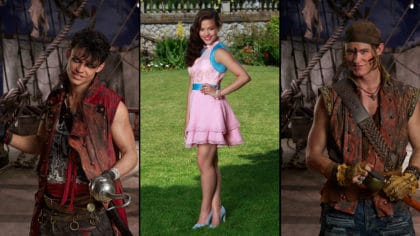 We have some totally awesome Descendants 3 news to share with you!

Descendants 3 is of course the third movie in a trilogy about the teenage sons and daughters of Disney’s most infamous villains.

Well, it has just been confirmed that Thomas Doherty, Dylan Playfair are taking back their roles as Harry and Gil.

Plus Audrey, the daughter of Princess Aurora is back and actress Sarah Jeffery is set to once again play her.

Dove Cameron is also back, taking her role as Mal. Cameron Boyce will play Carlos again, Sofia Carson as Evie, Booboo Stewart as Jay, Mitchell Hope as King Ben and China Anne McClain as Uma are all going to be there too.

We’re yet to hear a release date for Descendants 3, but we’re expecting it in 2019!

Watch Dan chat to Thomas Doherty and Booboo Stewart below!