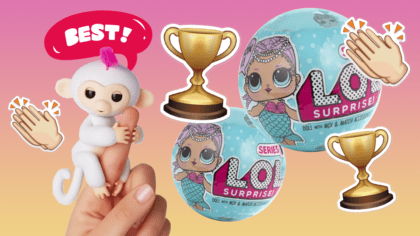 Every year, loads of people gather for a very special and very important award ceremony.

It’s not the BAFTAs or the Brits, the Grammy’s or the Golden Globes – it’s the Toy of The Year awards!

The awards honour the top toys of the previous year and like most award ceremonies, winners are given huge trophies called gongs.

Fingerlings won – they’re pets that cling to your finger and respond to your touch and voice!

L.O.L. Surprise balls came second in the fight for Best Toy of the Year. They’re like big Kinder Eggs packed with cool surprises!

They also got the award for Speciality Toy of the Year for the LEGO Star Wars Millennium Falcon.

Playing: you say by lauren daigle