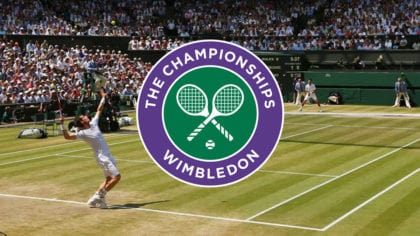 The Championships at Wimbledon is the oldest tennis tournament in the entire world and loads of people think it’s the best!

For two weeks every summer, some of the biggest and best names in tennis go to the All England Club in Wimbledon, London, and play each other.

Over the next two weeks, over 674 matches will be played. The entire fortnight is called a Grand Slam tournament and if you win it, it usually means you’re one of the best tennis players in the whole world.

Andy Murray won the Men’s Singles last year, the first time someone from the UK won it in over 70 years! He’s defending his title this year, meaning he wants to win again.

In total, over £31.6 million will be given to winners over the next two weeks, with the big winner getting a cool £2 million! Imagine all the sweets you could buy with that…

The final match always takes place on Centre Court. It’s the biggest and best, with loads of TV cameras and even more people!

Whilst it’s used all year around, Centre Court is incredibly special at Wimbledon and many tennis players see it as a really cool place to be.

You can see it in the photo below – Centre Court is the massive building!

There are loads of matches, from Men’s Singles to Women’s Singles, Doubles matches – where two people play on each side – and even matches with kids!

But tennis can be kind-of confusing, so we’re here to help.

Over the next two weeks we’ll be telling you all about how scoring works, who ball-boys and ball-girls are, and all about yummy strawberries and cream…