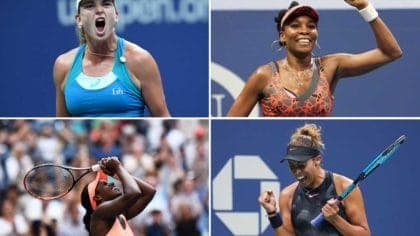 For the first time in 36 years, the semi-finals at the US Open tennis championship will consist of four American women.

Venus Williams, Sloane Stephens, Coco Vandeweghe, and Madison Keys have all made it through to the semi-finals in New York.

That means the final, which is on September 9th, will also be all-American.

Let’s take a look at some of the contenders!

Venus Williams’ victory over Petra Kvitova makes this her 23rd Grand Slam semi-final! She reached the final at her first US Open in 1997.

Venus will be going against Sloane Stephens, who reached the semi-finals for the very first time this year.

Garbine Muguruza, who won at Wimbledon, will now take the world number one title.

“I was real nervous today. The car ride over I was definitely feeling it, but once I got out here I felt really good.”

That’s what Madison Keys said who was the last American through.

“It has been a great two weeks for American tennis, seeing all the American players in the draw and all of them advancing so deep and competing so well.”

Meanwhile in the men’s wheelchair doubles, Alfie Hewett and Gordon Reid from Britain have made it through to the semi-finals.