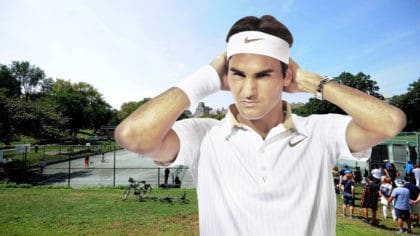 He went to Central Park’s tennis courts to train on Wednesday afternoon.

If you didn’t know, Central Park is a massive public space right in the middle of New York City. It’s a bit like Hyde Park in London.

The tennis courts are free to use and are open to the public most of the year.

Some people on social media couldn’t believe what they were seeing!

It’s an unusual sight because Federer usually trains elsewhere, like at private clubs and special grounds.

…and even took some selfies!

One tennis expert said that over the years, names like the Williams sisters, Maria Sharapova, Andy Murray, and the Bryan brothers have all used the courts in the same way Federer did on Wednesday afternoon.

What about Federer himself? What did he have to say about the experience? Just this: “Extremely cool”!