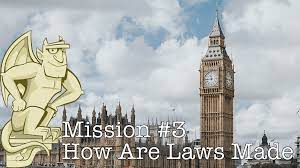 He gets to see all the goings on with the UK government and is always keen to talk about how it all works.

You should now have a better idea about what laws are and how they’re made.

What is a law?

Laws are the rules that shape our country, we have lots of them!

Why do we make new laws?

Things are always happening that show us that we need new laws to help make the country better for the people who live in it.

For example, in 2007 there was lots of flooding in the UK and lots of people lost their homes.

This showed the government that we needed better laws about how we protect people against flooding.

This led to a law being made called the ‘Flood and Water Management Act’ in 2010 which gives people better management of flood risks.

So how does the government make a new law?

It’s not as easy as someone writing a law and then that being the end of it.

MPs and Lords are the ones that decide what the laws say.

MPs are the members of parliament that are elected to represent a certain area and the Lords are people who know a lot about things like business and science so that they can offer an expertise that an MP may not be able to.

The bill – this is what a law is called before it’s a law – is read out in The House of Commons.

In the first reading only the title is read out so everyone can get an idea of what the bill is.

The MPs read the bill in full and then discuss what they agree and disagree with.

This is called debating the bill.

3. The bill goes to a committee

In this stage the bill goes to a group of people – the committee – who check the bill.

This is when the committee reports back to the chamber as a whole and give MPs their last chance to make changes to the bill.

MPs have a vote on whether or not the bill should be passed. If they vote yes then it goes to the House of Lords.

6. The Lords discuss the bill

The Lords will then discuss the bill and suggest changes.

Once over half of the Lords are happy with the bill it goes back to the MPs as they might have changed it a lot!

The bill goes back and forth between the MPs and the Lords as they both keep making and suggesting changes to the bill.

They call it the ping pong stage because the bill can go back and forth between the lords and MPs a lot – just like a ping pong ball!

This is the final stage.

Once parliament all agree on the bill it needs to go to the Queen so she can have a look at it.

After the Queen has signed off on the bill it becomes a law.

Check back tomorrow for another mission all about the government

Playing: if i didn't have you from monsters, inc. by randy newman