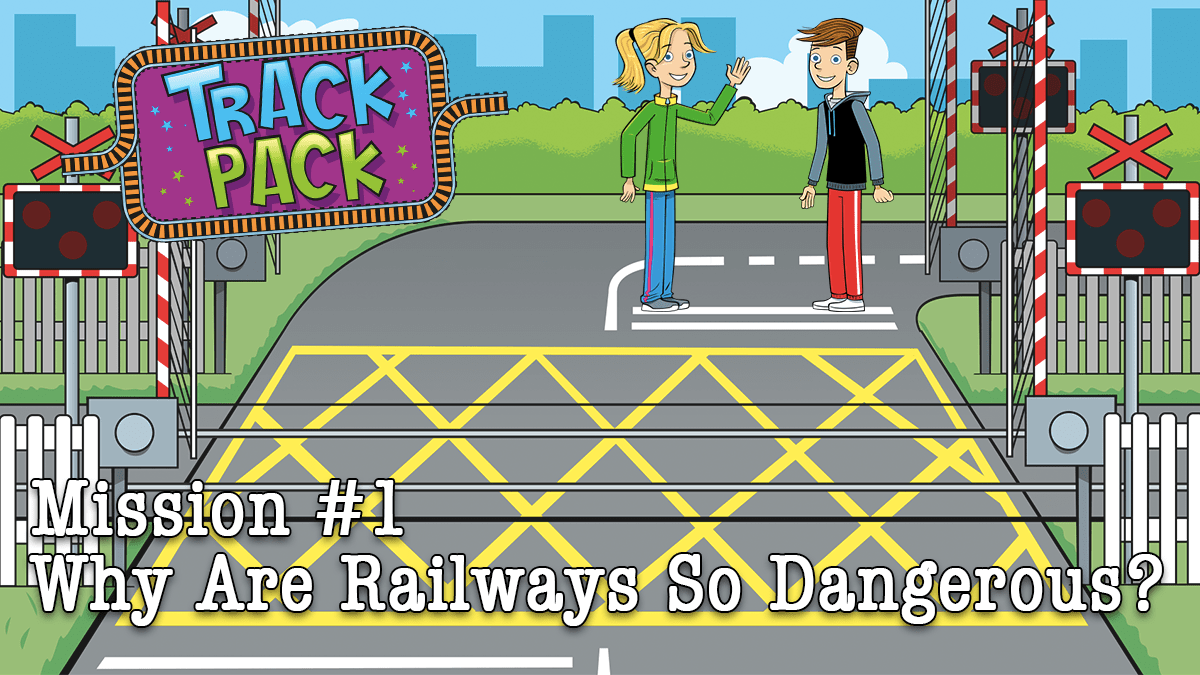 Jack and Ella make up the Track Pack, as well as anyone who knows how to stay safe around railways!

They live near a busy railway line and are always helping to teach people how to be safe around the train tracks.

After that you should have a good idea of why railway lines are dangerous and why it’s never a good idea to take a shortcut over them.

Why shouldn’t I play near railway tracks?

You could get very seriously hurt or even die if you go near the railway tracks – trains are heavy and take a long time to stop. And they can be powered by electricity.

That’s why there are always big fences around the railways and you can only get near trains at train stations or at parts of the railway that are made to cross over, like level crossings. The fences are to keep you safe!

Okay okay, so railway tracks are dangerous. What makes them dangerous?

There’s a few things that make railway tracks so dangerous.

The obvious danger is that a train comes along and flattens you!

It doesn’t take a genius to know that if it’s you versus a train, then the train will win.

This is a really big danger to being on any railway line because trains are so fast and so quiet. That means that even if you think it’s safe and don’t think a train is coming, they can sneak up on you without you even hearing them.

Trains are also so fast and so heavy that they can’t stop, if the train driver did see you and hit the breaks then the train still wouldn’t stop for a long time so it would still hit you.

Other then being hit by a train, what else makes the train tracks dangerous?

Some railway tracks have an electrified third rail or overhead wire which provide the trains with the power they need.

If you touch one of those then you would get a very nasty electric shock.

Sounds dangerous, why do railways have the third rail or overhead wire?

These wires and rails supply electricity to the trains as they move. Electric trains are much quieter than those power by diesel (or coal if its really old), and can also be much quicker. Most fast inter-city trains that travel up to 125 mph are electric powered, as are suburban trains and the underground.

How do I stay safe around railway tracks?

Easy! Just don’t go near them.

If you follow the rules and don’t go onto the railway tracks then you will be fine.

If where you live or play has a railway track near it, then there will be a fence to stop you going in, and signs to warn you.

If one of your friends wants to ignore the sign or climb over the fence, then just tell them why it’s so dangerous to make them stop.

Your mission is to complete this quiz about why railway tracks are so dangerous.

Check back tomorrow for another mission all about staying safe while you’re out and about.