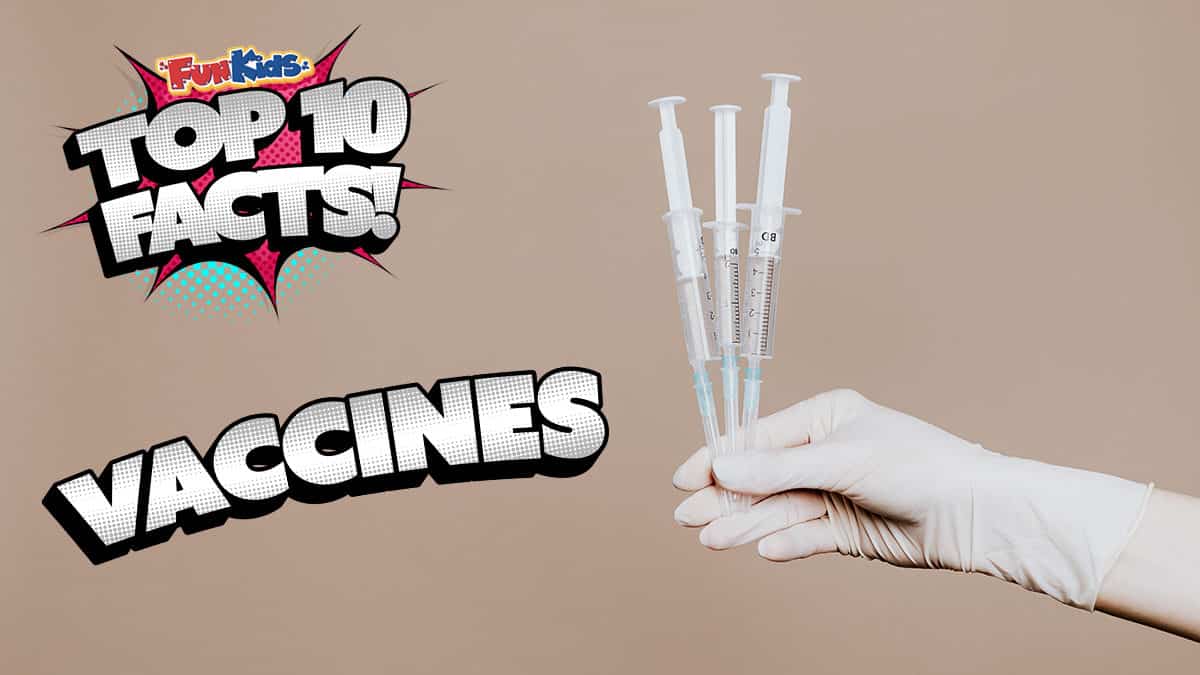 1. Vaccines give you immunity to diseases.

Vaccines help your immune system to identify a disease.

Once it knows what it is dealing with, it will create antibodies ready for when the real disease takes over.

When you catch the disease, those antibodies will work to fight it off.

You will be immune, which means you won’t be able to catch it.

Listen to this Professor Hallux episode about preventative medicines:

2. They prevent around 2.5 million deaths each year.

Vaccines are a brilliant way of saving lots of lives.

It is believed that they prevent 2.5 million deaths each year.

The first ever vaccine was made in 1796.

It was to prevent smallpox and was created by an English physician called Edward Jenner.

Edward worked out how to do this by taking some fluid from a cowpox blister.

He then got the fluid and scratched it into a boy’s (James Phipps) skin. This caused a small blister to appear, but it didn’t last for very long.

He then tried it again on James but with the fluid from smallpox.

The boy didn’t end up catching anything and this was when Edward realised that the vaccine worked.

4. The smallpox virus has been eradicated because of vaccines.

The last recorded case of smallpox was in 1997.

There hasn’t been a case since.

It is believed that because of the vaccine, the smallpox virus became extinct!

5. The vaccine doesn’t have an active virus in it.

Some people think that when you get a vaccine, you will have some of the active virus inside of you.

Vaccines don’t have an active virus in it, the vaccine only mimics the virus.

Your immune system will then build antibodies for the future.

6. You can get a vaccine in multiple ways!

You can get a vaccine in lots of different ways.

One way is by an injection in your body.

Another is orally in your mouth.

You can also have a vaccine through inhalation (through your nose)!

7. Babies get their first vaccinations when they are 8 weeks old.

Babies will receive their first vaccinations when they are 8 weeks old.

They then have more at 12 weeks, 16 weeks and then when they are one year old.

These vaccinations will protect against measles, rubella, tetanus and meningitis.

8. You might need to be vaccinated when going to certain countries!

When travelling to certain countries, it is often suggested that you have travel vaccinations.

There are some serious diseases that you might catch in other countries.

These vaccines are for infections such as yellow fever, typhoid and hepatitis A.

Some vaccines are free on the NHS but some have to be paid for.

9. Animals can get vaccinated too!

It’s not just humans who can get vaccinated.

If you have a pet cat or dog, you might not want to let them out until it has received it’s vaccines.

This will protect your cat or dog from picking up any illnesses.

10. Vaccines are approved after lots of testing.

When a new vaccine is developed, it goes through lots of testing to make sure it is safe.

First it gets developed in a laboratory and then tested.

It mostly gets tested on animals first such as mice, to check it is working.

Clinical trials will then start.

It will then be used on several thousand people.

After these tests have been successful, the UK government will look at all of the trial data and will then license it for use.

Find out more by listening to the Professor Hallux episode below:

Now you have learnt all about vaccines, try the quiz below!