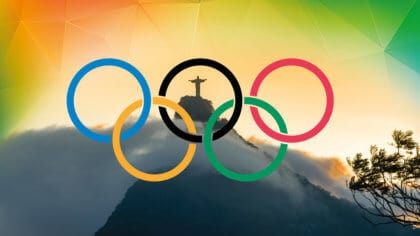 The Rio 2016 Olympic Games came to a end on Sunday evening with a massive closing ceremony!

Brazil is 4 hours behind us here in the UK so you might have been asleep when all the action was going on!

Dance group Grupo Corpo showed how important clay has been throughout human history – one of mankind’s first tools and materials!

The audience were treated to an incredible interpretative dance routine where multi-coloured dancers (in the five colours of the Olympic rings) formed famous Brazilian landmarks!

Parade time! Flag-bearers from all the countries competing at the Games walked in together, showing how the event is important for bringing nations closer!

The shoes are about to enter the arena… #ClosingCeremony pic.twitter.com/CgWsD70mYF

Team GB were kitted out with light-up trainers for the occasion! Where can we buy these?!

There was a lot of dancing in the closing ceremony because Rio and Brazil are famous for their epic carnivals!

Singer Julia Michaels performed with Norwegian DJ Kygo to get the party started!

The Mayor of Rio officially handed over the Olympic Games to the Mayor of Tokyo – where the next Games are being held in 2020!

It’s tradition for the hosts to let the next Games have a bit of the ceremony for their own performance. For Tokyo’s performance, Japanese Prime Minister Shinzo Abe appeared dressed as Mario – one of the country’s most famous characters!

Singer Mariene de Castor performed under a fake waterfall whilst the Olympic cauldron was extinguished!

The ceremony finished with a massive firework display, of course! Thanks Rio – it’s been amazing!