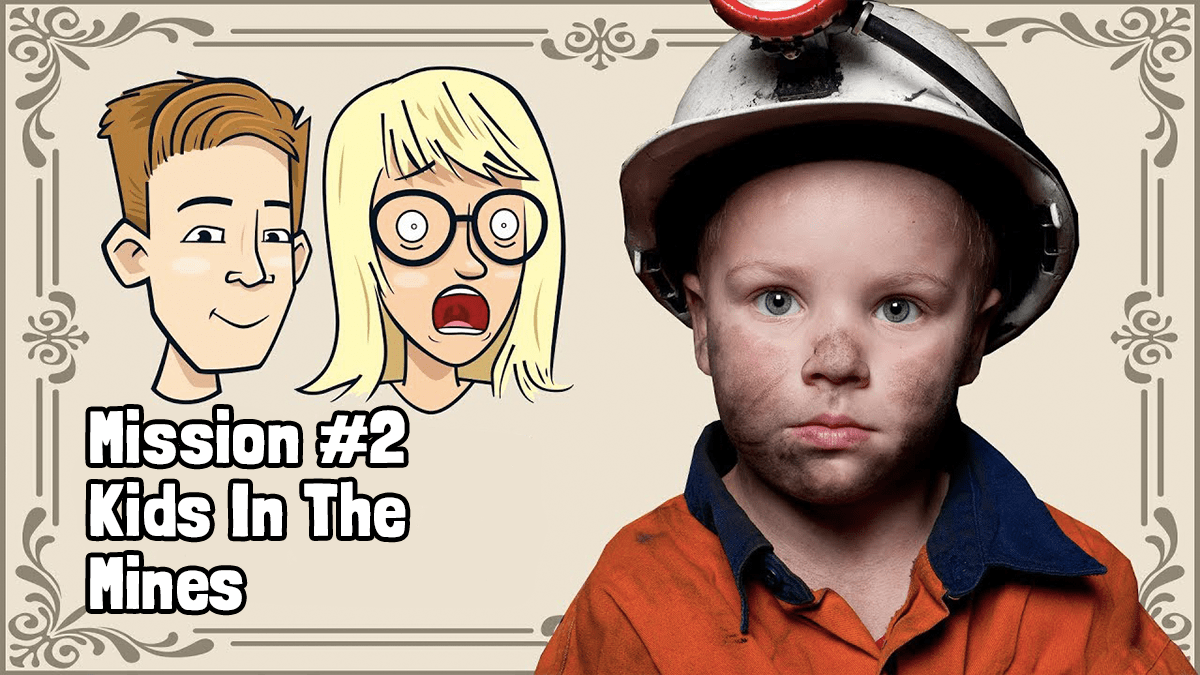 After that you should have a good idea of what working in the mine as a child was like back then.

Why were mines so popular back then? There are hardly any now!

Nowadays we use gas and electricity to power our houses and businesses but they didn’t have that back in Victorian times, so they used coal to get their power.

Coal exists deep in the ground in some places, so there were lots of mines back then to get coal because everybody wanted it.

A lot of coal was also needed to help power factories and lots more of these were springing up in the victorian times which ment more and more coal was needed.

Why did coal mines want kids to work there?

Well kids were cheap to employ. The mine owners wouldn’t have to pay them as much as they paid the adults.

They were also small and able to get through the really small tunnels in the mine that adults wouldn’t be able to fit through.

So what sort of jobs would the kids get in the mines?

• Boys and girls as young as 6 would open ‘trap doors’ in the tunnels whenever a cart needed to come past. For the rest of the time they sat on their own in the dark waiting for the next cart.
• They often did not have a candle because candles cost money. And couldn’t leave their post for a minute just in case a door needed opening.
• Whilst boring and pretty frightening, it was an important job for the safety of the mine and miners. Keeping doors shut whenever possible helped stop dangerous gases from building up.

• Boys and girls who worked on their hands and knees in the deepest tunnels, dragging carts of coal behind them using chains attached to their belt.
• As the mines were often dripping wet, children would spend all day in sopping wet clothes.
• Scabby knees was the least of their worries – you’d have hardly notice them when your muscles are screaming and got a crippling backache.
• Not all children pulled carts – some pushed them using their heads (giving them bald patches) and other carried coal up ladders and along passageways in baskets on their backs.

• Boys and girls who separated impurities from coal by hand in a coal breaker.
• The first function was to break coal into pieces and sort these pieces into categories of nearly uniform size, a process known as breaking.
• But coal is often mixed with impurities such as rock, slate, sulphur, ash, clay or soil, and so second function was to remove as many impurities as possible and grade the coal based on impurities remaining. This was not necessary when coal was used in cottage-industry grade production methods, but became necessary when economies of scale moved production into early factories with a larger workforce and those installations began producing glass and iron in greater quantities.
• Coal breaking was very dangerous and difficult, working an intensive 10 hours a day, 6 days a week.
• They would sit on wooden benches perched over chutes and conveyor belts. Some of the boys would work on top of the chutes. These boys would stop the coal by pushing their boots into the stream of coal flowing beneath them and try to pick out the impurities. Others would divert the coal into a horizontal chute where they sat to pick out the unwanted material before the coal would go to the clean coal bins.

Working in a mine sounds horrible! When did it start to change?

Things started changing in 1842 when it became illegal for children and women to work in mines.

Things didn’t change straight away though, there was only one inspector checking that mines were following these rules and he would warn the mine when he was coming!

This meant it was very easy to ignore the law when it first came into practise.

Eventually these laws started getting taken more seriously though and kids stopped working in the mines.

Click here to see the next mission all about the jobs kids did on the city streets!

Playing: no money by galantis