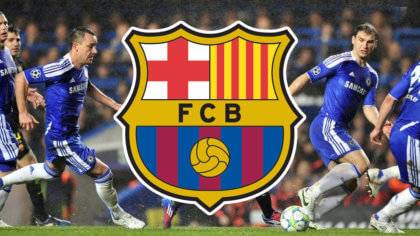 Incredible scenes! A hat-trick from Tino Asprilla fired Kenny Dalglish’s team to an incredible 3-2 triumph over Barca at a jumping St James’ Park. Barca’s current boss Luis Enrique was in the visitors’ midfield and even bagged a goal!

Goals from little wizard Gianfranco Zola and Tore Andre Flo gave Chelsea a 3-0 lead over Barca at the Bridge, but an away goal in the second half from Luis Figo gave the away team hope for the second leg – which they won 5-1. Ouch!

The Blues took a 3-0 lead as Barca were blown away in the first half-hour with goals from Eidur Gudjohnsen, Frank Lampard and Damien Duff. Ronaldinho hit back with two goals, but John Terry settled it with a second-half header!

Compared to the previous goal-fests, this was much tighter! A goal from Blues legend Didier Drogba settled this group game and saw Chelsea take a big step towards the knockout stages. Plus, Barca were the defending champs!

Not many teams stop Barcelona scoring in two legs, but Sir Alex Ferguson’s Red Devils managed it in 2008. After a goalless first leg in the Nou Camp, Paul Scholes scored
a wicked screamer to take United all the way to the final!

David Villa opened the scoring for Barca in the 26th minute and they could’ve had loads more after dominating the first half. But Arsenal held firm and late goals from Robin Van Persie and Andrey Arshavin sent the Emirates wild!

Another game against Barca, another goal for Drogba. The Ivory Coast striker scored the winner and gave The Blues a lead going into the next leg. It proved vital, as Chelsea bagged a 2-2 draw in the Nou Camp to take them to the final!

This week’s issue looks at how Rashford can save United!

There’s also a look at the new Football Manager game!

Playing: someone you loved by lewis capaldi