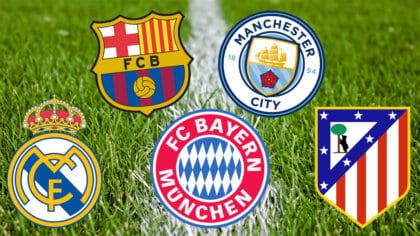 City’s form has form has been stinking up the pitch lately, but let’s face it, when Aguero and co are up for it, they’re unstoppable! Plus, they’re still top of the table, which shows just how much they bossed it at the start of 2016-17!

Guardiola gave Kev more freedom in attack with a new central role and De Bruyne rewarded with him four assists and two goals!

It’s been business as usual for the brilliant Bayern ballers, who have had to deal with lots of injuries this season but are still top of the league and second in Champions League Group D. Their +16 goal difference is the best in Europe’s top five leagues!

Bayern are about to hand Lewy a new, mega-money contract and it’s no wonder – he’s already notched seven goals this term!

Diego Simeone’s stars are best known as a solid defensive unit, but it’s been goals galore for Atletico lately after scoring 11 in their past five matches – including one in an impressive win against Bayern. They’ve got the best team spirit in the game!

Griez is on flames! He’s got six goals to his name and has just won La Liga Player Of The Year for last season!

Zinedine Zidane’s team are one of only FOUR in Europe to remain unbeaten in 2016-17 – and C-Ron hasn’t even been at his world-beating best. Just imagine what they’ll be
like when Ronaldo starts scoring!

The German has pulled the strings in midfield with a 93.7% passing accuracy and has set up five goals!

Barca haven’t hit top form yet, but their recent 4-0 demolition of Man. City in the Champions League proves they’re the hottest team in the world right now with MSN also back to their best in attack. Their displays have been absolute fire!

MOTD mag readers recently voted him the world’s best striker and it’s no wonder – he’s got ten in 13 this season!

This week’s issue looks at how Rashford can save United!

There’s also a look at the new Football Manager game!

Playing: blinded by your grace part 2 by stormzy feat. mnek