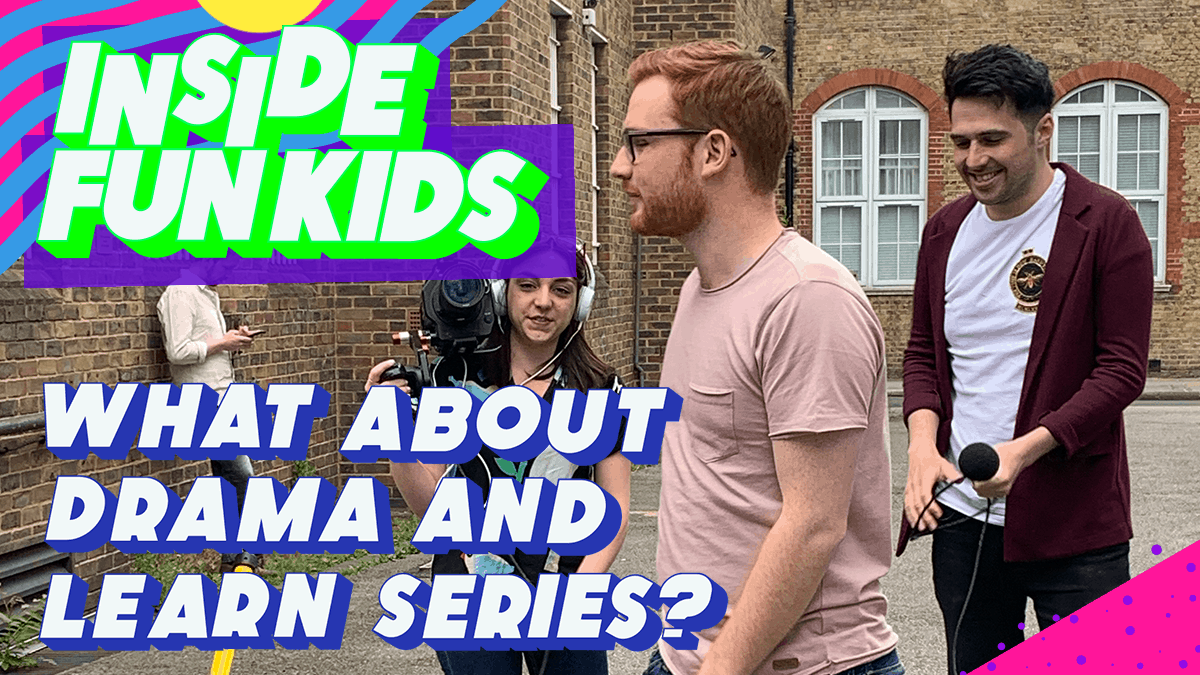 Some of the things we broadcast aren’t related to the latest cool song, new book or Robot’s latest TERRIBLE joke. We produce drama and also documentary series to help you learn about things you might not know.

Because we have an amazing audience, we work with lots of organisations and companies who want kids, like you, to know more about what they do – and that could be almost ANYTHING!  Historic palaces, cities of the future, all types of science from anatomy to zoology.

For each project, we need to be really clear about what message a company wants to get across, and what topic areas it wants to cover.  So we start by spending a lot of time talking to them and making notes.

It’s also really important that we get the facts right, so if we are writing about something from history – like Edwards’ Diary or the Tudors at Hampton Court Palace, we’ll be talking to historians, reading lots online and often visiting them to learn more.

Of course, it’s not JUST history!  We’ve done series about everyday things – such as Life in the Armed Forces, how to design a new vacuum cleaner and how to stay safe around the railways. That still means talking to experts, scouring online and working our way through a very big pile of books!

The next part of the process is to come up with the narrative – that means how do we want to tell the story.  It’s something we have to decide before we can write a single word of a script.

Is there a narrator or is it a group of kids?  Are they travelling in time or discovered a diary telling the story?  If we’re exploring something that’s around today, we might use one of our existing characters like Professor Hallux or Techno Mum – or we might come up with something totally new like Nancy and the Meerkats!  The sky is the limit!

We have lots of fun deciding the best way to get the message across – and the great thing here is that everyone can throw their ideas in – the more the merrier!  No idea is a bad idea!

A script is the lines that the narrator or actors will say, with other instructions about how the feature should sound.  We lay it out on the page in a special way to make it easy for everyone involved to understand.

Once the scripts have been agreed, we have to find the voice talent – the actors who will read them out.  They might be female or male, young, old – or even aliens, animals or famous figures.

Luckily, actors are really good at coming up with the right voice for the job, like Gerald Dickens.  He’s the voice behind Sir Sidney McSprocket and was also Charles Dickens in our Christmas Panto – which was especially apt as he is the great-great grandson of the famous author!

We use the same actors for regular characters.  But if a script includes new characters, we’ll test out a few voices to see which fits the best.  Then it’s into the studio to get the lines recorded!

These days we can record over the internet or even the phone if it’s not possible to get to the studio.  They’ll read the lines and I’ll make sure it’s all recorded onto the computer system.

First, we have to edit the recordings, which mostly means deleting all the bits where the actors said the line wrong or started slurping their tea or something like that, which we don’t want in the finished product. Then we need to add the sound effects. Most features have sound effects to help set the scene, like doors opening, background noises or music that reflects the historical period.

It’s important to get the effects just right so they help our listeners create the pictures in their minds – and not distract them from the feature itself.

Whilst many radio stations focus on music, some produce features about things happening in their areas, and stations like BBC Radio 4 produce more dramas and documentaries than pretty much anyone else, including the longest running radio soap opera – The Archers.

The way they do it is pretty similar to us here at Fun Kids – careful research, scripting and then making it come alive in production.  The BBC have their own studios, researchers, writers and producers but they also ask production companies to come up with ideas and make programmes for them.  So who knows?  If you like putting on plays or writing stories, or if you love getting stuck into a topic, maybe you could get a cool creative job in radio production!