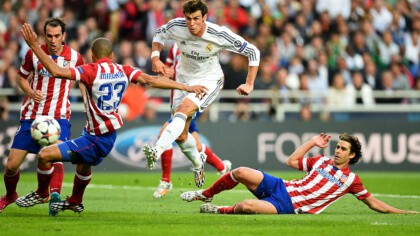 Eight reasons why this year’s Champo League final is going to be a classic!

Zinedine Zidane and Diego Simeone are like chalk and cheese! Zizou, once a magical midfielder, loves beautiful footy and wants his team to score as many goals as they can, while Simeone, a snarling centre-mid in his day, is a tough-talking boss who wants his team to defend strongly and hunt down victories at all costs.

If there’s one thing Atletico do well, it’s buying top attacking stars. There’s just one problem – they ALWAYS end up selling them! In recent years they’ve been blessed with some absolute baller strikers who’ve banged in goals for fun, but a bigger team always manages to lure them away. With Antoine Griezmann scoring 32 this season, he won’t be short of mega offers in the summer!

These two met in the UCL final back in 2014 at Benfica’s Estadio Da Luz – and Atletico are still angry about it. At 1-0, they were just seconds away from winning the cup when Sergio Ramos scored a 93rd minute header – taking the game to extra time. Real went on to win 4-1 and have bragged about it ever since. Simeone wants revenge!

C-Ron is no stranger to getting a hat-trick – he’s bagged an epic 41 of them in his career. But if he wins a THIRD Champions League medal, it will be his most impressive to date. He’s already won the trophy with Real and Man. United, and if he can do it again he’ll join an elite Champions League hat-trick hero list of 28 Real stars who have won the trophy three times!

Real, established in 1902, are very much Spain’s glitzy and glamorous team – it’s superstars and trophies – while Atletico, founded in 1903, are a team of rebellious warriors who have always been in Real’s royal shadow. The rivalry is fierce!

Don’t get us wrong, Atletico play a brilliant defensive and counter-attacking game, but they’re also known for their crafty tactics. Their players, fans and even subs do whatever it takes to disrupt the opposition’s flow – from throwing on extra balls to blowing referee’s whistles in the crowd. But you know what, you’ve got to admire their win-at-all-costs mentality!

Say what you want about Real Madrid – they know where the back of the net is. The ball is like a magnet to the goal when it leaves the feet of their players – especially in recent weeks. They’ve bagged a staggering 25 goals in their last ten games, which is perfect form heading into a final!

133 – The total number of goals scored by Real Madrid this campaign in all competitions, with 15 different scorers!

Milan’s monster 81,000-seater stadium will be hosting this season’s final and there is probably no better venue for it. The San Siro is known for creating an awesome atmosphere because of its boxed-in structure – and with it being the home ground to both AC and Inter Milan, it’s used to hosting derby battles, so expect this clash to the take roof off on Saturday!

20,000 tickets have been given to both the Real and Atletico fans for this mega match!

In this issue it’s all about the Champions League Final!

Plus MOTD mag looks at who will be spending the big bucks on transfers this summer!

There are also 2 packs of Match Attax Champions League cards with every issue!